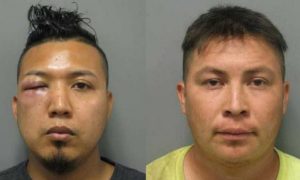 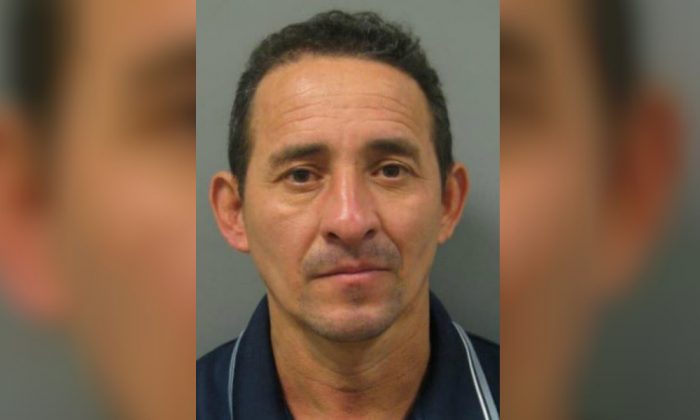 Nelson Reyes-Medrano, 46, is accused of raping a 16-year-old girl in her bedroom in Montgomery County, Maryland. (Montgomery County Police Department)
Crime and Incidents

Illegal Immigrant Raped 16-Year-Old Girl in Her Bedroom While Holding Knife to Her Throat: Police

An illegal immigrant in Maryland is accused of getting into the bed of a 16-year-old girl and holding a knife to her throat as he raped her.

The teenage victim told police that she was taking a nap when she felt someone else get on the bed. She opened her eyes and saw the 46-year-old man on top of her, according to documents obtained by WJLA.

Reyes-Medrano had a knife in his hand and ordered her to take off her clothes. She didn’t respond, prompting him to hold the knife to he throat, telling her, “Last time I’m going to say it … take your clothes off.”

When she proceeded to obey him too slowly for his desire, as she hoped someone would enter the apartment if she didn’t undress too fast, the man ripped her clothes off and began raping her.

MORE: Cops say Reyes-Medrano grew impatient and placed the knife against the victim’s neck. He then ripped off the 16yo girl’s clothing. What is alleged to have happened next is too troubling to publish…

The victim told detectives she was in pain during the entire assault. pic.twitter.com/p7c0CRivdC

The victim said she was in pain during the rape, which stopped when Reyes-Medrano heard a noise outside the apartment.

Police said the knife the man was holding was one he brought with him to the apartment, suggesting premeditation.

Immigration and Customs Enforcement (ICE) told WJLA that Reyes-Medrano is an El Salvador native who is in the United States illegally. Authorities said he’s a father of 10 children. The agency has placed an immigration detainer against the man in an effort to deport him.

ICE did not respond to a request for information from The Epoch Times.

Reyes-Medrano and his attorney requested he be let go on bail until trial, reported WJLA, but Judge Amy Bills ordered him held without bail.

He later wrote that the county will cooperate with ICE detainers for illegal aliens who are charged “with serious crimes.”

Reyes-Medrano is the fifth illegal alien to be arrested on rape charges within one month in the county.

Montgomery County did not return a request for comment from The Epoch Times.

“Clearly, this new modification to executive order has not solved anything, since on Aug. 13, Rodrigo Castro-Montejo, another defendant charged with a second-degree rape, and in the country illegally, was released from county custody after paying a $1,000 surety. Jail officials made all of one phone call to the wrong number before releasing Mr. Castro-Montejo,” he continued.

“Is this a sign of Mr. Elrich’s new policy? To continue to make every effort to obstruct ICE while still leaving him the fig leaves, a pathetic pretense of cooperation? These are not hypothetical political debates. In the 30 days since the announcement of Mr. Elrich’s executive order, county law enforcement has commenced at least five rape prosecutions against defendants who are in this country illegally, with child victims in at least two cases.”