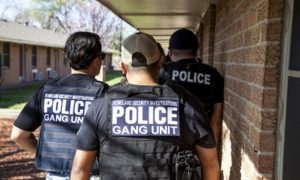 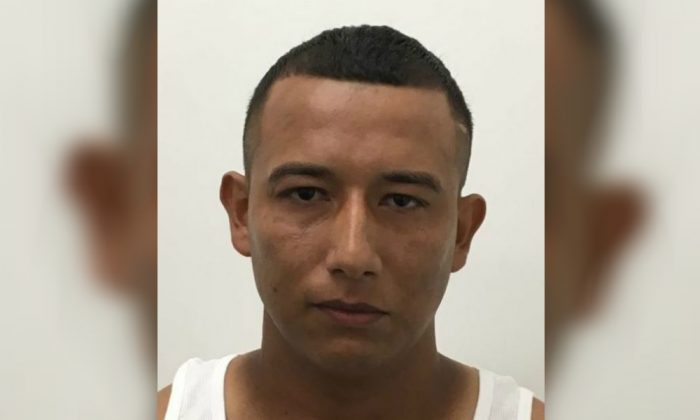 Kevin Mendoza, 26, was captured on surveillance footage raping a woman inside her apartment building in Montgomery County, Maryland, according to court documents. (Montgomery County Police Department)
Crime and Incidents

Four illegal aliens have been arrested on rape charges in Montgomery County, Maryland, in less than one month, casting a spotlight on the liberal county’s sanctuary policies.

Rodrigo Castro-Montejo, 25, of El Salvador, was arrested by police on Aug. 10 on charges of rape and sexual assault.

According to a police report obtained by WJLA, Castro-Montejo is accused of raping a female friend after a night of drinking. The woman was at the hospital when she texted the man, asking if he’d stopped short of sexual intercourse, and he replied that he had not.

NEW: @ICEgov accuses Montgomery County, Md. of releasing an undocumented immigrant accused of rape from jail despite a detainer on file.

MORE: According to police, Castro-Montejo raped a female friend after a night of heavy drinking.

The victim texted Castro-Montejo from the hospital, asking if he stopped at touching or engaged in sexual intercourse.

“Oo a little bit of both to be honest,” he allegedly replied. pic.twitter.com/InNW4R26XC

Despite the alleged rapist being an illegal immigrant, he was let go on $1,000 bail paid for by another woman until trial by Montgomery County District Court Judge Rand Gelber.

Immigration and Customs Enforcement (ICE) confirmed that it missed a call from Montgomery County about six hours before Castro-Montejo was let out of prison but ICE said the officer was traveling and that the county should have tried to contact other officers or call its 24-hour law enforcement support center before releasing the alien.

Two illegal immigrants were arrested in July for allegedly raping an 11-year-old girl.

Mauricio Barrera-Navidad, 29, and Carlos Palacios-Amaya, 28, both of El Salvador, were arrested after the girl told a social worker she was raped by the men, who were friends with her older brother. Police found video on Palacios-Amaya’s cellphone showing him raping the girl.

ICE said in mid-August that both men are in the country illegally.

In a statement obtained by Fox 5, the agency said that Palacios-Amaya was deported from the United States in 2014 but reentered the country at some point, and Barrera-Navidad was ordered deported in December 2016 but was never deported.

Kevin Mendoza, 26, was arrested on Aug. 16 for allegedly raping, assaulting, and trying to murder a woman who he attacked as she entered her apartment building carrying a basket of laundry.

Mendoza grabbed the woman as she entered a door to the building, threw her to the floor, and started strangling her, according to court documents obtained by WJLA. She screamed but no one came to help and she was raped as the man allegedly said, “You know you like this.”

“Doctors advised that the severity of the strangulation could have easily resulted in the victim’s death,” police wrote in court documents.

Surveillance footage showed the entire rape and Mendoza was identified and arrested. He allegedly vowed to confess if he could talk to his family over the phone beforehand.