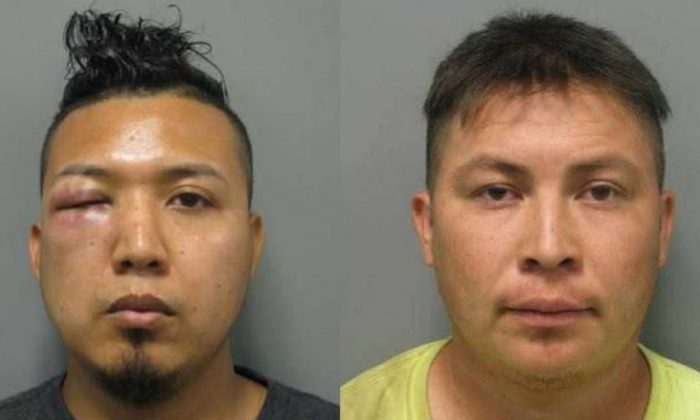 Mauricio Barrera-Navidad, 29 and Carlos Palacios-Amaya, 28, both illegal immigrants from El Salvador, raped an 11-year-old girl, the girl said. Police found pictures of the girl with Palacios-Amaya on his cellphone. (Montgomery County Police Department)
Crime and Incidents

Two illegal immigrants raped an 11-year-old girl who is the younger sister of their friend, authorities said.

Both were charged with second-degree rape.

The girl who said they raped her, now 12, said that she was introduced to Palacios-Amaya by her older brother.

At one point, the man “used his cell phone to video record the two of them having sex,” police noted in court documents obtained by WJLA.

On a number of weekdays, the accused got the girl to stay home from school and raped her at her house as her parents were at work, the girl told a social worker.

Investigators obtained Palacios-Amaya’s phone and found a slew of photographs showing him and the victim together.

Barrera-Navidad, the other man charged, met the girl at her older brother’s birthday party in July 2018 and allegedly raped her that night.

An El Salvadorean native, Barrera-Navidad has four children. While a judge granted him $100,000 bond, he has not posted it and remains in jail.

Palacios-Amaya also hails from El Salvador. He was charged with four counts of rape and denied bond.

Immigration and Customs Enforcement said in a statement obtained by Fox 5 that both accused rapists are in the country illegally.

Palacios-Amaya was deported from the United States in 2014 but reentered the country at some point.

Barrera-Navidad was ordered deported in December 2016 but was never deported.

The agency lodged detainers with the Montgomery County Detention Center on both men.

“Detainers serve as a legally-authorized request, upon which a law enforcement agency may rely, to continue to maintain custody of an alien for up to 48 hours so that ICE may assume custody for removal purposes. Pursuant to ICE policy, all ICE detainers are submitted with an accompanying administrative arrest warrant or warrant of removal depending upon the circumstances of the individual case,” the agency stated.

Despite the raft of sanctuary policies, officials have in the past insisted the county isn’t a sanctuary county.

“Local police and the Department of Correction and Rehabilitation work cooperatively with ICE in their work on immigration and customs violations and drug and human trafficking. The county’s arrest and detention information goes to the state and all state information is accessed by Immigration and Customs Enforcement through their Secure Communities initiative.”

Frank Madrigal, who is the Baltimore deputy field office director for ICE Enforcement and Removal Operations, told The Epoch Times that cooperation and information sharing among law enforcement agencies is critical to public safety.

“The notion that local officers might be legally barred from such cooperation with a federal law enforcement agency could put the public they are both sworn to serve and protect at greater risk,” Madrigal said.

“Sanctuary policies like those proposed in Maryland could permit dangerous criminal aliens, with no lawful basis to remain in this country, to be released and to potentially re-victimize the communities to which they are returning.”