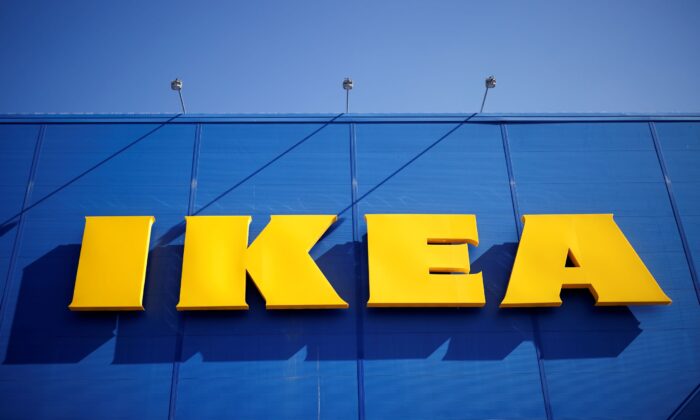 The company’s logo is seen outside of an IKEA Group store in Saint-Herblain near Nantes, France, on March 22, 2021. (Stephane Mahe/Reuters)
Businesses in COVID-19

Furniture retailer Ikea told The Daily Mail on Jan. 9, that they would cut sick pay for unvaccinated staff in the UK who self-isolate after contact with a person with the CCP Virus.

The Swedish furniture retailer, which employs more than 10,000 people across 22 stores in the UK, joins an expanding list of companies that are slashing pay for employees who are unvaccinated.

“Unvaccinated co-workers without mitigating circumstances who have been identified as close contacts of a positive case will be paid statutory sick pay,” said an Ikea spokesperson.

“We appreciate that this is an emotive topic and all circumstances will be considered on a case by case basis, therefore anyone in doubt or concerned about their situation is encouraged to speak to their manager.”

As of last August, those with two vaccine shots in the UK are not required to self-isolate if they have been in close contact with someone infected, but the unvaccinated are required by the government to isolate for 7 to 10 days after close contact.

Special exceptions made for particular circumstances, such as pregnancy or other medical grounds, will allow unvaccinated employees to be eligible for full pay.

Ikea said its approach to sick leave-related absences changed due to staff shortages last September and that individuals absent from work would be reviewed “on a case-by-case basis.”

“Following the vaccine rollout and changes in the government’s isolation requirements, our approach to COVID-related absences evolved from September 20, 2021—an approach developed with our social partners and national co-worker committee,” continued the spokesperson.

The company clarified that the policy only affected unvaccinated workers with “high levels of absence.”

Many companies have suffered from labor shortages throughout 2021, and are again seeing mass absences due to the Omicron variant.

Many British employers are cutting sick pay to encourage more vaccinations and to force down labor costs.

In the United States, some employers have insisted that staff be fully vaccinated or else pay monthly fees, in the case of Delta Air Lines, or even lose their jobs at companies such as United Airlines, Google, and Citigroup.

In the UK, denial of employment due to vaccination status policies is not easy to implement due to strong worker protections and rules against discrimination.

Employers could face lawsuits if they implement inflexible employee mandates.

“Requirements must be proportionate, non-discriminatory, and make provision for those who cannot be vaccinated for medical reasons,” said a spokesperson for the UK Equalities and Human Rights Commission.

The main exception in the UK are health care workers have been obliged to be vaccinated since November.