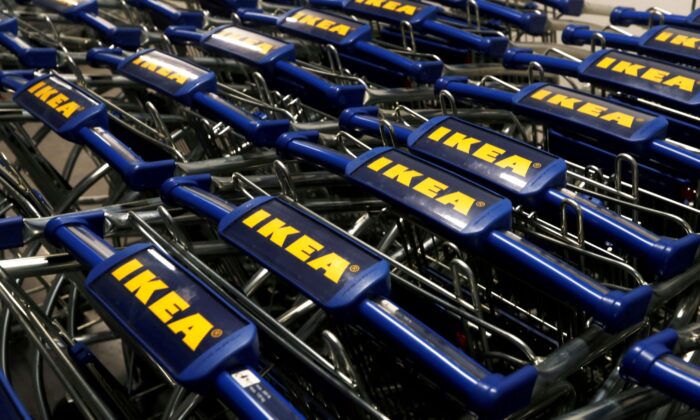 The IKEA logo is seen on shopping carts inside an IKEA store in Navi Mumbai, India, on Dec. 17, 2020. (Francis Mascarenhas/Reuters)
Companies

STOCKHOLM—The owner of the IKEA furniture brand said on Wednesday it would raise prices due to supply chain challenges far into 2022, after it reported a drop in full-year profit due to higher transport and raw material costs.

Despite record demand as people spend more time at home due to the pandemic, pretax profit at Inter IKEA Group—franchisor to store owners and in charge of supply—fell 16 percent in the 12 months through August to 1.71 billion euros ($1.98 billion). Compared with the pre-pandemic fiscal 2019, profit was down 4 percent.

“The global pandemic affected our operating income in FY21. The biggest cause was the steep increase in transport and raw material prices in the second half of the financial year,” privately-held Inter IKEA said in its annual summary.

The company, which makes money mainly from sales of goods to its franchisees, said in October retailers’ sales totaled a record 41.9 billion euros ($48.5 billion), up 6 percent on the year, and up 1 percent from fiscal 2019 as locked-down consumers spent more than ever on their homes, and despite product shortages.

“Keeping IKEA stores and warehouses stocked has been a challenge. Supply chain disruptions led to a substantial drop in the availability of products that we have yet to recover from. We expect this will continue far into FY22,” it said on Wednesday.

“FY22 for us will be a more difficult year with more challenges,” he said in an interview.

“The scarcity and pricing of raw materials, and then the logistical problems—that means it will be difficult to grow in FY22. Of course we plan for growth, we will go for it, but it’s going to be very, very hard work in our supply chain, and with our retailers as well.”

Inter IKEA kept its product prices to retailers stable in the year but flagged it would pass on some of the higher raw material and transport costs to store owners this fiscal year.

“Though we can’t continue to secure fixed prices to the retailers under these challenging conditions, we also plan to absorb part of the increased costs during FY22,” it said.

Van Dam said store owners would then have some liberty to decide whether, or to what extent, they should pass on higher prices to shoppers.