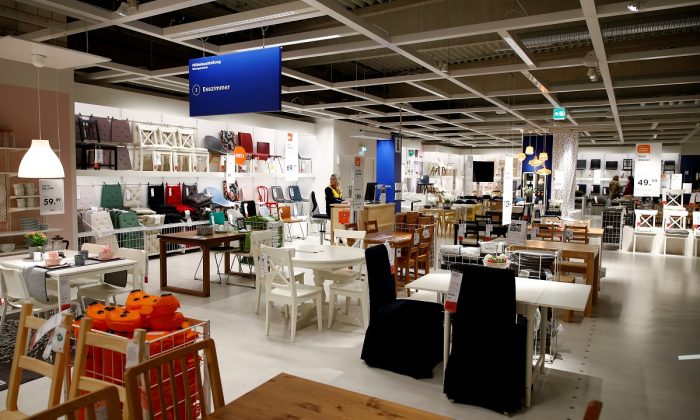 A show room of an IKEA store, the world's biggest furniture group, in Kaarst near Duesseldorf, Germany, on April 3, 2019. (Wolfgang Rattay/REUTERS/File Photo)
Companies

Ikea is branching out into real estate and is now offering a tiny home in Japan for less than $1 per month as part of its Tiny Homes apartment rental service campaign.

The Swedish retailing giant, best known for its compact and low-priced furniture, shared details of the new apartment in a release this week.

As part of its new campaign, Ikea is renting out 107-square-foot apartments in the Shinjuku neighborhood of Tokyo for just 99 Japanese yen, the equivalent of $0.86, for Ikea Family members.

Currently, just one tiny home is available, and it comes fully furnished with Ikea furniture and accessories, although the rent does not include moving costs or utilities.

The company is accepting applications from potential tenants, who must be aged 20 or over, from now until Dec. 3. The future apartment owner will move into their new home from Dec. 15 2021 until Jan. 15 2023.

While the 10 square meter apartment—which looks more like a room—may seem small in size, the Dutch-headquartered company has naturally managed to make the most of the space.

The apartment comes equipped with a loft space for a bed, a washing machine, a kitchenette, a bathroom with a toilet and shower, and is decked out with full furnishings and décor from Ikea, of course.

“One of the keys is to make good use of the vertical space,” the company said on its website. “By capturing the room three-dimensionally, new possibilities open up in a limited space.”

However, the future homeowner will be required to shoot a video or conduct a photo shoot of themselves living in the property and also take part in other activities that Ikea “separately instructs,” although further details about what those activities entail are not provided.

Ikea is promoting the tiny apartment with the help of a frontman, in the form of a giant stuffed shark named Blahaj, who features in a series of promotional videos published on YouTube and Instagram.

With a population density of 6,158 persons per square kilometer, according to the Tokyo Metropolitan Government, Tokyo is one of the most densely populated cities in the world.

But while housing prices continue to surge in major cities around the world, in Tokyo, they have barely risen since 1995, driven in part by construction companies staying on top of supply and demand, The Wall Street Journal reported in 2019.

Japan’s housing starts rose by 4.3 percent year-on-year in September 2021 according to official statistics. Although that figure signaled the weakest rise in housing starts since March, it is still significantly more than America. In that same month in the United States, housing starts fell 1.6 percent, below expectations, driven by acute shortages of raw materials and labor.

Data released on Sept. 9 from Realtor.com showed that the United States was short of 5.24 million homes, an increase of 1.4 million from the 2019 gap of 3.84 million, driven by increased housing demand across the country and a lack of materials and workers in the construction industry.