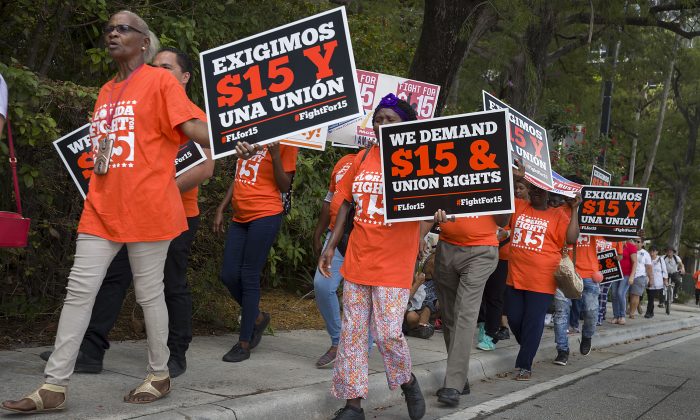 People gather together to ask the McDonald’s corporation to raise workers’ wages to a $15 minimum wage as well as demanding the right to a union in Fort Lauderdale, Florida on May 23, 2019 (Joe Raedle/Getty Images)
Politics

Tom Baber, who operates an IHOP restaurant and a Money Mailer shop in Mercer County, New Jersey, has to deal with “very personally painful” consequences of state-imposed minimum wage increases every day.

“It’s very personally painful for me because I do not want one person to have to cut their hours or leave here, but there’s not a lot of choice for us,” Baber told reporters July 15 during an online news conference hosted by the Employment Policies Institute (EPI) think tank.

“We are getting into a more difficult position as it continues to go up. We are looking at automation on the cooking side, and we’ve started to institute some stuff on the ordering side that will come out very soon.”

Raising the hourly pay of the lowest-level employees also ratchets up the costs of retaining employees in higher-level jobs, Baber said.

“Fifteen dollars at the busboy level means considerably more at the cook and head cook level, which are already in the high-teens level. Assistant managers are above that and the managers—obviously, everybody has to go up,” he said.

The inevitable result of further increasing the minimum wage will be “some inflation because I know that we would have to raise prices or we can have job losses, but it likely will be a combination of both,” he said.

Baber’s IHOP restaurant employs 40 people, but he said that number will be reduced as he and thousands of other New Jersey businesses deal with an increase in the minimum wage to $10 an hour, which was recently mandated by state officials.

That $10 an hour would go to $15 an hour by 2025 under legislation that House Democrats may bring to the floor for a vote later this week. The bill, known as the “Raise the Wages Act of 2019,” was reported out of the House Education and Labor Committee to the full House.

The Congressional Budget Office made public a report last week, in which it said it projects such an increase in the minimum wage would improve the lives of 17 million people, but also cost at least 1.3 million jobs and could put as many as 3.7 million low-wage workers on unemployment.

Besides hiking hourly pay, the House bill indexes it against future inflation and does away with the sub-minimum wage paid by many employers whose employees also receive tips.

“It’s a struggle for us because we’re saying we don’t want this but people aren’t listening to us,” said Racynski, a mother of three who is especially worried about losing tips and the way the voices of low-wage workers like her are being ignored by advocates of the higher minimum.

“We have a bunch of celebrities out there saying that we’re being taken advantage of, and the problem I have with it is that we’ve reached out to them and said, ‘We don’t feel that way, would you like to talk about this? We’d like to tell you our side of it.’”

The lack of response to her Facebook group left Racynski feeling “they don’t seem to care that there’s a whole lot of us out here saying, ‘Leave us alone, we’re fine.’”

Chaisson’s group, the Restaurant Workers of Maine, was formed in 2016 after state voters approved an initiative that raised the minimum to $12 an hour and did away with the “tip credit,” which allows employers to pay a sub-minimum wage as long as they make up the difference when tips don’t equal the mandatory minimum.

“Admittedly, I am pretty far left as a Democrat myself,” Chaisson said. His group succeeded in persuading state legislators to restore the tip credit. Then, they were asked for help in 2017 by District of Columbia workers opposing similar tip credit proposals.

“We made our case to the city council. I sat side-by-side with workers from across the city who were making it clear that the folks who were pushing this idea were not speaking for us,” he said.

District of Columbia officials agreed and restored the tip credit.

“Everywhere I have traveled across the country in the last couple of years speaking to industry workers everywhere, it is a matter of them not realizing that their voices carry a lot of weight,” Chaisson said.

“The idea that the Raise the Wage Act would eliminate the tip credit entirely makes it clear that those legislators are simply not listening to workers.”