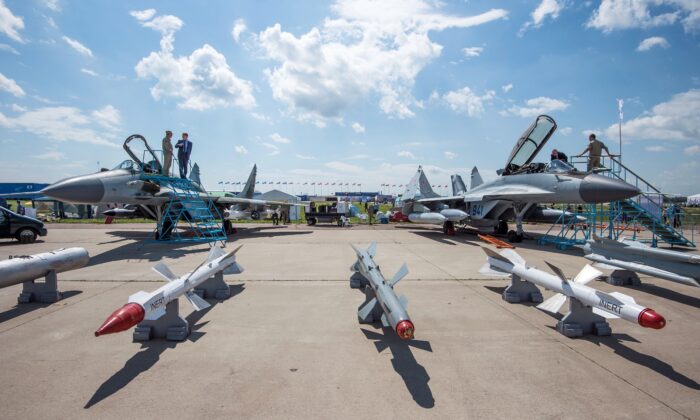 Different missiles attached to Russian warplanes are on display during the opening day of the annual air show MAKS 2017 in Zhukovsky, Russia, on July 18, 2017. (Mladen Antonov/AFP via Getty Images)
Thinking About China

If Russian Arms Exports Falter, Will China Fill the Vacuum?

In the 2005 film “Lord of War,” an arms dealer (played by Nicolas Cage) argued that armaments had become one of Russia’s biggest exports since the end of the Cold War. “After that,” he said, “comes vodka, caviar, and suicidal novelists. One thing is for sure, no one was lining up to buy their cars.”

Anyone who has driven a Russian car would know what he means, and, yes, Russia’s biggest exports are mainly oil and gas, followed by minerals. But the point remains that overseas arms sales are a huge moneymaker for Russia’s economy.

Russia is, in fact, the world’s second-largest arms exporter after the United States. Over the past decade, Moscow has, on average, exported around $6.2 billion worth of arms, according to data put out by the Stockholm International Peace Research Institute (SIPRI). This translates into an approximately 25 percent share of the global arms trade.

Russia’s arms industry has become particularly dependent on exports, especially exports to Asia. Again, according to SIPRI, more than 61 percent of Russian overseas arms sales have gone to Asia and Oceania in recent years. Just two countries, India and China, account for nearly half of all Russian arms exports. Vietnam is also a major buyer of Russian weaponry.

In 2015, Beijing inked a $2 billion deal with Moscow for two dozen Su-35 air-superiority fighter jets. The Su-35 is the current jewel-in-the-crown of the Russian combat aircraft family, and export sales are crucial.

At the same time, Southeast Asia has been a particularly lucrative market for Russian arms producers. In recent years, Moscow has sold Su-27 or Su-30 fighter jets to Indonesia, Malaysia, and Vietnam, and MiG-29s and Yak-130 trainer jets to Burma (also known as Myanmar). Other important sales include Russian air-to-air missiles, anti-ship missiles, and helicopters.

Russia’s invasion of Ukraine has put a lot of its potential arms exports at risk. Many countries that have bought Russian weapons either supported the United Nations’ efforts to punish Moscow (such as suspending Russia from the Human Rights Council) or, at the very least, abstained. It is doubtful that these countries would then find it appropriate to turn around and buy Russian arms.

Russia’s diminished arms export capacity and potential have significant implications for the Asian arms market in particular. Of course, India and China—both of whom have refused to condemn Russia’s invasion of Ukraine—will likely continue to acquire Russian weapons systems or military technology. They are simply too much at the mercy of Moscow to let go anytime soon.

At the same time, these countries might decide that now is a good time to reduce their dependencies, either through diversifying their suppliers or expanding indigenous procurement. India, for example, is buying more and more military equipment from Israel and the United States.

The loss of arms sales—particularly to Asia—could be catastrophic for Russia’s defense industry. Moscow obviously does not want to lose access to this money-spinning business, yet Russian arms deals will likely falter, at least in the short term.

This will leave behind a vacuum that other arms competitors could sweep in to fill. U.S. and European defense companies could snap up new sales. In particular, the Ukrainian war has demonstrated the effectiveness of man-portable weapons systems like the Javelin and NLAW anti-tank missiles or the Stinger and Starstreak air-defense missiles. The export of such weapons could skyrocket.

But China could likely benefit the most from any fall-off in Russian arms exports. Countries that do not wish to buy Russian arms may also not want to be seen buying Western weaponry, as it might be interpreted as being too much in the pocket of the West.

This quandary could open the door for Beijing to start exporting arms to new customers, particularly in Southeast Asia, Latin America, and Africa. For example, Indonesia has acquired anti-ship missiles, artillery systems, and multiple rocket launchers from China, while Malaysia has bought Chinese warships and anti-aircraft missiles. These markets could open up for expanded sales of Chinese weaponry.

At the moment, Beijing captures only around 5 percent of the global arms market, about one-fifth that of Russia. Nevertheless, China has typically been among the top five arms exporters for the past two decades. A few new sizable arms deals to a few new customers could catapult China into a solid number three position and give Beijing a chance to solidify its position as a go-to arms supplier.

Russia is setting itself up for big losses in the international arms market, perhaps for quite a while. In turn, China’s future as a preeminent arms dealer is Beijing’s to win.