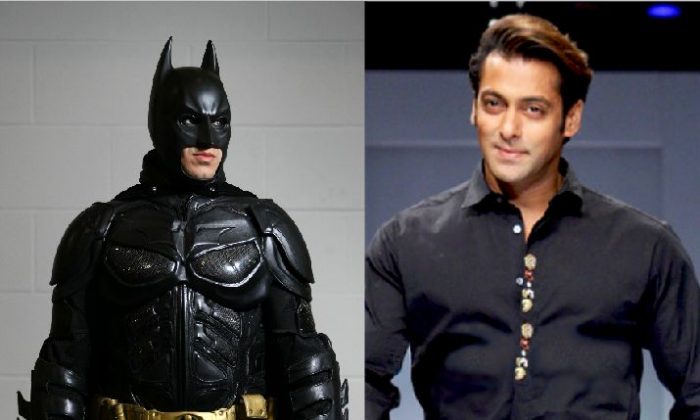 Left: An actor dressed as Batman poses for a photo at the London Super Comic Convention at the ExCeL Centre in London, England, on Feb. 23, 2013. (Jordan Mansfield/Getty Images) Right: Salman Khan, an actor a Quora user felt would make a good Batman if an Indian version of the movies were ever made. (Wikimedia Commons)
Entertainment

If ‘Batman’ Were Made in India How Would the Plot Go?

Ever wonder what a Bollywood “Batman” trilogy would look like? Epoch Times has compiled some of the key elements an Indian Batman would have from the musings of users on Quora.

“Batman would be slapping his thighs before every fight,” suggests Dileep Patchigolla. Patchigolla uses the following video as an example of such thigh slapping.

“At the end, Batman gets seriously wounded and the prayers of millions of his fans would restore him,” suggests Chandru Gopalakrishnan.

“While super-villains would exist, they would be somewhat cheesy,” writes Murukesh Mohanan.

Shobhit Khinvasara imagines how Bruce Wayne’s wealth may be explained in an Indian context: “Our protagonist … is the son of a very successful farmer in Haryana who used to grow and sell exotic fruits. His family [goes] out of town for a long vacation, [and] his neighbors—a bunch of selfish, greedy people—illegally annex [his family’s] land by using false papers and some political backing.” Khinvasara continues to explain how his parents are killed in the ensuing land dispute, and this is how Batman would become an orphan.

Khinvasara adds: “Indian Batman is trained in all the martial arts and speaks all Indian languages … He is an expert in Mallakhamb and other gymnastics. Being an Indian, he is also a brilliant hacker and does not rely on a tech expert like Lucius Fox.”

“Even if Wayne is orphaned, expect a mother-figure somewhere to cry and make sweets (not at the same time, maybe) and arrange a marriage for Batman,” suggests Mohanan.

Mohanan and other participants in the Quora thread noted lots of singing would be included without doubt. There would be “Item songs, mourning songs, songs about songs,” says Mohanan.

Khinvasara thinks Delhi is a good match for Gotham, saying, “Delhi is currently exactly what Gotham city would be like, full of crime and helpless people.”

Chandru Gopalakrishnan notes a Tamil movie titled “Mugamoodi,” which means “mask.” Gopalakrishnan describes the movie: “The director has attempted to interpret the character of Batman, simply as an angry young guy without superpowers putting on a mask and taking on crime relying only on his skills. What he ended up making was a hilariously lame attempt at creating a truly rooted Indian superhero.”

“The movie had wannabe versions of Fox, Gordon and Alfred, a villain who tries to be a mix of Scarecrow and the Joker.”