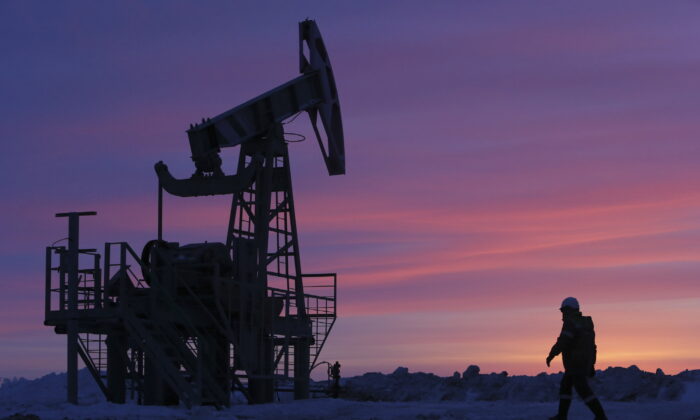 A worker walks past a pump jack on an oil field owned by Bashneft company near the village of Nikolo-Berezovka, northwest from Ufa, Bashkortostan, on Jan. 28, 2015. (Sergei Karpukhin/Reuters)
Commodities

LONDON—Oil markets could lose three million barrels per day (bpd) of Russian crude and refined products from April, the International Energy Agency (IEA) said on Wednesday, exceeding the one million bpd per day demand drop high prices are expected to cause.

The Paris-based watchdog said sanctions and buyer reluctance to purchase Russian crude were pushing up oil prices in a way that would hit personal budgets, drive up inflation, which has already hit multi-decade highs, and undercut economic recovery.

“The impact of loftier prices for oil and other commodities will … increase inflation, reduce household purchasing power and are likely to trigger policy reactions from central banks worldwide—with a strong negative impact on growth.”

“Surging energy and other commodity prices, along with financial and oil sanctions against Russia, are expected to depress world GDP and oil demand,” it said in a report.

It was the first monthly report on oil from the IEA, which represents 31 mostly industrialized nations but not Russia, since Russia’s invasion of its neighbor briefly sent Brent crude to a 14-year high of nearly $140 a barrel.

“We see a reduction in total (Russian) exports of 2.5 million bpd, of which crude accounts for 1.5 million bpd and products 1 million bpd,” the IEA said in its monthly oil report.

“These losses could deepen should bans or public censure accelerate,” the Paris-based IEA said.

The IEA lowered its forecast for world oil demand for the second to fourth quarters of 2022 by 1.3 million bpd. For the full year, it cut its growth forecast by 950,000 bpd to 2.1 million bpd for an average of 99.7 million bpd.

That would mean a third year of demand below pre-pandemic levels. Previously, the agency had expected demand to recover in 2022.

The Ukraine crisis has exacerbated the issue of limited output capacity.

Top OPEC+ producers Saudi Arabia and United Arab Emirates, which are rare among global producers, in having surplus capacity, are not fully opening their taps and the IEA does not expect output rises from Canada, the United States, and others to eliminate global undersupply.

The world is set for a supply deficit of 700,000 bpd in the second quarter, the IEA said.

Storage levels in OECD countries in January stood at their lowest levels since April 2014, it said.