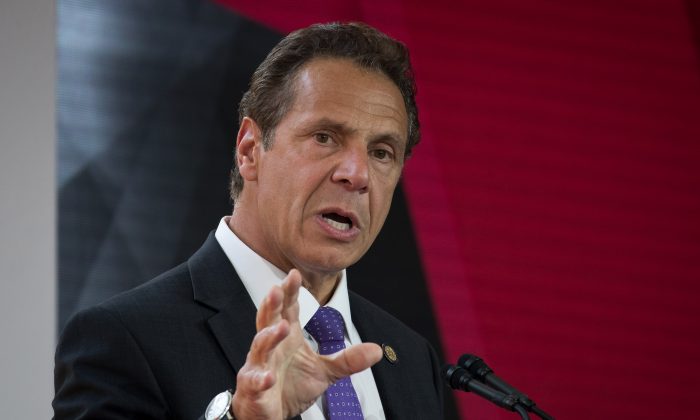 Cuomo said the pardons may not automatically remove the grounds of removal for those facing deportation, but they are “a necessary predicate to regaining the right to remain here in the country they call home.”

“While the governor’s pardons appear to be yet another politically driven attempt to circumvent federal immigration law, whether or not they actually have any legal effect on individual immigration cases will be reviewed by ICE,” Decker said in a statement on Jan. 1.

“For aliens who remain subject to final orders of removal under federal law, ICE will execute those lawful orders.”

These are not consequences they can escape by a governor exercising pardon authority like a magic wand.
— Jessica Vaughan, director of policy studies, Center for Immigration Studies

Most of those pardoned had obtained legal immigration status at some point, but were convicted of crimes so serious that their legal status was forfeited, according to Jessica Vaughan, director of policy studies at the Center for Immigration Studies.

“However, it’s questionable whether this [pardons] will succeed, because under immigration law pardons do not necessarily wipe out the effect of the original conviction,” Vaughan said. “There’s also a potentially very negative political result, as people question why these governors would take this action to protect criminals from the consequences of their actions, or simply to undermine immigration laws that the general public wants to see enforced.”

Perez is a national of the Dominican Republic who has lived in the United States for decades. He works as an electrician and helps look after his autistic brother. The pardon will strike his record and allow Perez to apply for citizenship, according to Cuomo.

Christopher Cavallo, 66, wants to be pardoned from his 1977 drug crime so that he can run for public office in Florida and expand his security business, according to Cuomo.

It is unclear which country Cavallo is a national of, but his security company has an office in Bogota, Colombia.

Vaughan said voters are not going to be fooled by the pardon.

“The reality for these people, whether they have been rehabilitated or not, is that these are not consequences they can escape by a governor exercising pardon authority like a magic wand,” Vaughan said.

Earlier this year, prosecutors in Brooklyn, New York, and Baltimore, Maryland, instructed their staff to consider alternative offenses and sentence modifications for illegal immigrants to protect them from possible deportation.

Gonzalez instructed his assistants to consider “alternative offenses the defendant can plead to as well as reasonable modifications to the sentence recommendation.”

The alternative offense should be similar in level and length of sentence to that offered to a citizen defendant, but the charge may be different, Gonzalez said.

Baltimore is also one of 11 cities and counties that are putting public money into a new program that provides free lawyers for illegal immigrants who are facing deportation.

The effort is part of the Safe City Baltimore initiative that was established on April 20 by the Open Society Institute–Baltimore, in partnership with the Baltimore City Mayor’s Office of Immigrant and Multicultural Affairs.

Open Society is a George Soros-run organization that has pledged to donate $1 for every $2 contributed to the Safe City Baltimore Fund.

On Oct. 5, Brown signed into law SB-54, which made the state of California a sanctuary effective Jan. 1, 2018. The new law says local and state law enforcement can be penalized for cooperating and communicating with immigration officials.

Typically, Immigration and Customs Enforcement (ICE) lodges a detainer to a local jail that is holding an illegal alien of interest. A detainer is a request that an inmate be held for up to 48 hours longer so that ICE can take custody.

Some sanctuaries, such as in Chicago, New York City, and Los Angeles, also forbid immigration agents from entering jails to interview convicted criminal aliens. The criminals are instead released back into the community.

“That doesn’t make sense to me,” ICE Deputy Director Tom Homan said on Oct. 17. “Every criminal alien that gets released by a sanctuary city that reoffends, has committed a crime that’s preventable.

“Even immigrant communities don’t want criminals in their communities.”

Homan said that as of July 31 this year, almost 10,000 criminal aliens who were released onto the streets—rather than being turned over to ICE—have committed another crime.