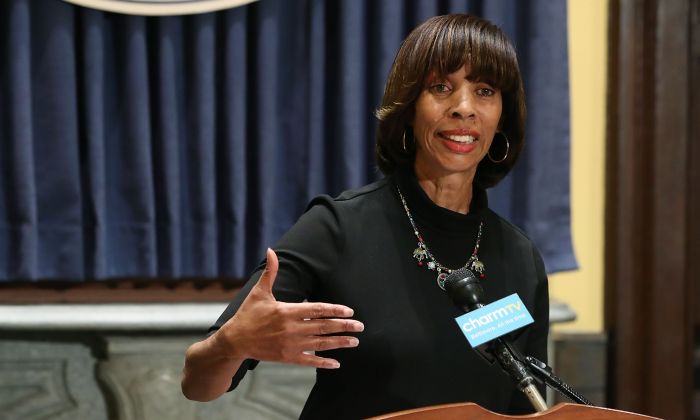 Baltimore is one of 11 cities and counties that is putting public money into a new program that provides free lawyers for illegal immigrants who are facing deportation.

The Vera Institute of Justice said it has pledged half of the money to provide lawyers, while the participating cities and counties have committed to paying the rest.

Nicholas Turner, president of the Vera Institute, said the SAFE Cities Network program is a common sense immigration policy that ensures “all people, regardless of background, income, and history, are guaranteed a fair day in court.”

“As a judge, I certainly had to look out for the rights of individuals who were representing themselves in my court,” he said on Nov. 13. Arthur is now a fellow for the Center for Immigration Studies, a Washington-based think tank that advocates for the enforcement of immigration law.

“There are due process protections in place for aliens even if they’re not represented by counsel,” Arthur said. “Even the government attorney has an obligation to ensure that if that individual is not removable or is eligible for some form of relief, that the alien has the opportunity to apply for that form of relief.”

Turner said the SAFE Cities Network is a good use of taxpayer dollars.

“Not only does such public funding for indigent immigrants facing deportation maintain trust within our communities, it ultimately increases public safety and keeps deserving families together,” he said in a statement on Nov. 9.

“Providing legal representation to those facing deportation maintains trust in law enforcement and our local institutions and keeps us all safe,” she said in a statement on Nov. 9.

Arthur said it is up to cities and states to determine what to spend local taxpayer money on, but that taxpayers should take note that money is being spent on individuals who are unlawfully present in the United States.

“Providing paid counsel for criminal aliens—even for those who are simply here illegally—is probably not the wisest use of taxpayer dollars—particularly in localities that have high crime rates, that need more police,” he said.

He said it’s “nonsensical” to think the new initiative will make the city safer.

New York City pioneered the idea of funding lawyers for illegal immigrants, and in April, Mayor Bill de Blasio announced a $16 million pot of money towards it. A study by the New York Immigrant Family Unity Project showed that illegal immigrants without a lawyer had a 4 percent success rate, which jumped to 48 percent with a lawyer. The evaluation was undertaken at the Varick Street Immigration Court in the city, and didn’t specify whether the lawyers were all provided free, or whether some illegal immigrants had provided their own lawyers.

The effort is part of the Safe City Baltimore initiative that was established on April 20 by the Open Society Institute-Baltimore in partnership with the Baltimore City Mayor’s Office of Immigrant and Multicultural Affairs.

Open Society is a George Soros-run organization that has pledged to donate $1 for every $2 contributed to the Safe City Baltimore Fund.

The Vera Institute has also received grants from the Open Society Foundation.