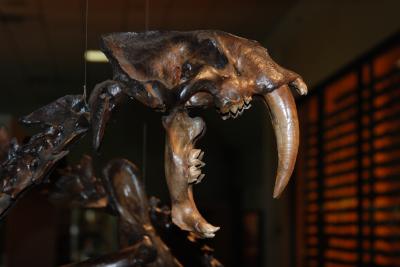 A saber-toothed cat skeleton in the Page Museum at the La Brea tar pits. (Courtesy of Larisa DeSantis/Vanderbilt University)
Science

Right before the saber-toothed cats went extinct 12,000 years ago, they were probably enjoying plenty of prey instead of starving as scientists used to think.

Researcher Larisa DeSantis from Vanderbilt University led a study on the teeth of saber-toothed cats and American lions to find out if they had enough to eat toward the end of their existence. The findings contradict previous studies that showed the cats were starving.

“We know that when food becomes scarce, carnivores like the great cats tend to consume more of the carcasses they kill,” said DeSantis in a press release.

“If they spent more time chomping on bones, it should cause detectable changes in the wear patterns on their teeth.”

To analyze these patterns, the researchers used a new technique called dental microwear texture analysis (DMTA) for creating three-dimensional computer images of each fossilized tooth. The computer identified different features on the surfaces of the teeth, probably more accurately than the scientists could have done by hand.

DeSantis and colleagues studied the teeth of 15 saber-toothed cats and 15 American lions from the La Brea tar pits in Los Angeles.

They compared fossils from different times, between about 35,000 and 11,500 years ago, and there didn’t seem to be any extra bone-gnawing toward the end. If anything, there was less.

“Their teeth tell us that these cats were not desperately consuming entire carcasses, as we had expected, and instead seemed to be living the ‘good life’ during the Late Pleistocene, at least up until the very end,” said DeSantis.

Previous studies looked at the large number of broken teeth the cats had, which seemed to show that those prehistoric cats chewed more bones than modern predators. However, DeSantis points out that larger teeth tend to break more easily, so the big cats of those days may have simply broken a lot of teeth while hunting prey.

The research was published in the journal PLOS ONE on Dec. 26.