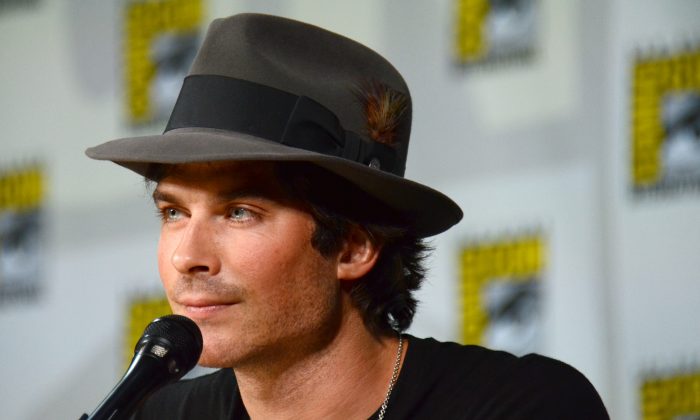 Ian Somerhalder and Nikki Reed to be Married? And Latest on Nina Dobrev

Ian Somerhalder will be married someday, perhaps but not definitely to current girlfriend Nikki Reed.

Somerhalder is set to star in season 6 of The Vampire Diaries, despite his character Damon Salvatore dying in the season 5 finale. Now Damon and Elena are apart, just like Ian and Nina Dobrev in real life.

Dobrev has been trying to get her mind off of her former boyfriend, sharing on Instagram that she’s close to buying a plane ticket to go somewhere.

The pair were together at the Vampire Diaries panel but it got awkward because they made sure to keep far apart, a source said.

“It was awkward, all the other cast were sitting way closer to each other,” an eyewitness told Hollywood Life.

Vampire Diaries season 6 is set to premiere on October 2.

SAN DIEGO—Season 5 of The CW’s “The Vampire Diaries” ended with characters Damon and Bonnie (played by Ian Somerhalder and Kat Graham) being separated from their loved ones as they enter a mysterious, purgatory-like dimension.

The cast returned to Comic-Con on Saturday where they played a video of Somerhalder and Graham wondering about their fate off-screen, now that their characters are trapped in oblivion. Are they off the show? Will they get a spin-off?

“The Vampire Diaries” is a about vampires, werewolves, doppelgangers, witches and a few humans living in and around the fictional town of Mystic Falls, Virginia. It’s loosely based on a book-series.

—Season 6 picks up about four months after the events of the finale.

—Davis’ character Alaric, back from the dead and a full-time cast member again, is now a college professor.

—Plec doesn’t see Dobrev’s Elena turning to her former flame Stefan Salvatore for anything other than friendship, now that she’s separated from Damon. “Right now the love between Damon and Elena is so strong,” she said.