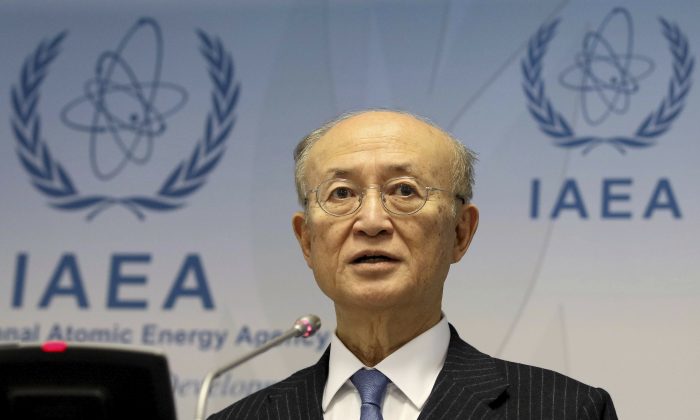 International Atomic Energy Agency (IAEA) Director General Yukiya Amano of Japan addresses the media during a news conference after a meeting of the IAEA board of governors at the International Center in Vienna, Austria, on Nov. 22, 2018. (Ronald Zak/AP Photo)
Asia & Pacific

VIENNA—Yukiya Amano, the Japanese diplomat who led the International Atomic Energy Agency for a decade and was extensively involved in negotiations over Iran’s nuclear program and the cleanup of the 2011 Fukushima nuclear disaster, has died at 72, the agency announced on July 22.

Amano, who had wide experience in disarmament, non-proliferation diplomacy, and nuclear energy issues, had been chief of the key U.N. agency that regulates nuclear use worldwide since 2009.

The news of his death comes at a time of increasing concerns and escalating tensions over Iran’s nuclear program. President Donald Trump withdrew from the Iran nuclear deal last year and reimposed tough sanctions on the Iranian regime. The president viewed the deal as flawed, in part because the terms allowed Iran to be in a position to quickly return to developing a nuclear weapon, a concern that materialized with Tehran’s announcement on July 1.

Amano was heavily involved in the yearslong negotiations that led to the Iran nuclear deal.

The United States withdrew from the multinational nuclear deal a year ago and Iran has recently breached the terms by exceeding a limit on its uranium stockpile set out in the accord. European leaders are scrambling to keep the accord intact.

As head of the IAEA, Amano also dealt with the aftermath of Japan’s devastating 2011 Fukushima nuclear power plant accident, where three reactors went into meltdowns after a tsunami.

The IAEA said Amano died Thursday but his family had asked the agency not disclose his death until a family funeral had taken place Monday. It did not give a cause of death for Amano or say where he died.

The IAEA said Mary Alice Hayward, the agency’s deputy director general and head of the department of management, would lead the agency in the interim.

Amano was Japan’s representative to the IAEA from 2005 until his election as director general in July 2009, including a stint as chair of its board of governors from 2005 to 2006.

A graduate of the Tokyo University Faculty of Law, Amano joined the Japanese Foreign Ministry in 1972 and was posted to jobs in Belgium, France, Laos, Switzerland, and the United States. At the ministry, Amano was chief of the Disarmament, Non-Proliferation and Science Department from 2002 until 2005.

He also previously served as an expert on the U.N. panel on missiles and on the U.N. expert group on Disarmament and Non-Proliferation Education.

He is survived by his wife, Yukika.

By Kirsten Grieshaber and Kiyoko Metzler