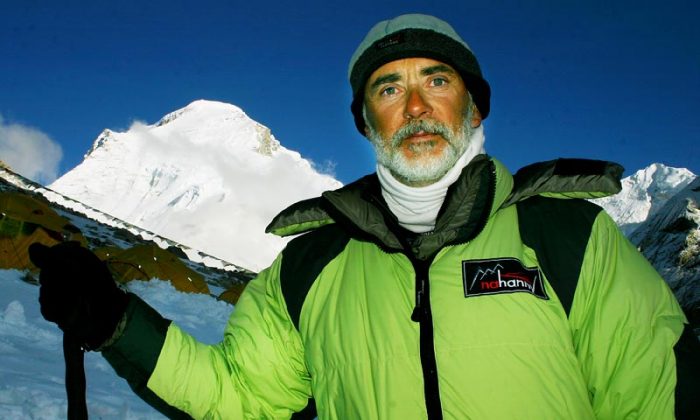 ‘I Witnessed the Massacre in Tibet’

COPENHAGEN–Pierre Maina sat in a restaurant at Copenhagen Airport. He gently fiddled with his coffee cup as he searched for the words to describe his Tibet trip. “We went to Tibet on August 27 and retuned to Denmark on October 12. This was my first time going to China and joining a mountain climbing tour in Tibet,” said Maina.

Forty-seven-year-old Maina is the doctor in charge of surgery at the Slagelse Sygehus Hospital in Denmark, as well as a member of the Mountaineering Association. The association has 400 mountaineering fans from around the world with most of the members being from western European countries. Two months ago, Pierre and three other Danish mountaineers fans joined the fall mountaineering trip organized by the association. They planned to climb Cho Oyu Mountain in Tibet, which has an elevation of 8,000 meters.

Cho Oyu is located in the central part of the Himalayas, 20 km west of Mount Everest. It is the sixth highest summit in the world with an elevation of 8,201 meters.

According to Maina, this mountaineering trip left an indelible mark on his psyche. Our conversation begins from this permanently snow-covered Cho Oyu Mountain…

The mountain climbers had already been staying in this high, cold area for more than a month, during which time they overcame countless problems and severe tests. They finally reached the final camp before the summit. They settled down and prepared to climb to the top. Maina was having troubles with altitude sickness. Therefore, when the other three Danes and the rest of the group headed to the summit, Pierre had no choice but to stay and rest at the camp, which was at an elevation of about 5800 meters.

“Our tent is not far from the Chinese border with Tibet and Nepal. It is called the Nangpa La Pass. Every day we can see some Tibetans transporting some goods across the border, and the majority of them went to Namche Bazar in Nepal to sell their goods. However, on that morning, everything changed!” said Maina.

“On Saturday morning, September 30, I was sleeping in the tent and suddenly was woken up by the sounds of shooting. At first I didn’t realize that the sounds were gunshots, as I never heard shooting before. After five to ten minutes I had changed into my clothes and walked out of my tent. The first thing I saw is that some 50 meters from our tent, some Tibetans tried to run fast, and they all seemed like children. Many Chinese soldiers began shooting at them. I saw the person at the very front of this group shot and fall down,” Maina recalled.

Maina didn’t know what happened at that time, so he walked to another tent of the encampment. Their cook, two Tibetans and five Nepalis were there. Through their introduction, he then knew that a group of Tibetans was trying to across the border to go to India to find their spiritual leader, the Dalai Lama, for shelter. In order to stop them, the Chinese border guards shot them. “They told me that Tibetans are usually not allowed to cross the border, and they cannot obtain permission to leave Tibet. Only a few Tibetans are allowed to sell goods in Nepal.”

Maina, after witnessing the shooting, was so shocked that he couldn’t speak a word. “At that time I could not comprehend what had happened. Everything just seemed so unbelievable,” he said.

“Later, when I was talking to a Romanian from another tent on this issue, I realized that I had become a witness. This was a massacre, but the victims had no weapon and no ability to fight back. They could only try to run. However, on a wide, open, glacial terrain, there is no place to hide. The majority of the fugitive Tibetans were young people. I was told that two of them were just teenagers.”

Recently, the exiled Tibetan government announced that in this incident, out of 77 people, at least two girls were shot dead. One was 14 and the other 17 years old. Another 20 people were arrested and are facing imprisonment. Currently, there is still no accurate count of how many people have lost their lives.

Later, Maina learned that the Tibetans there lived an extremely poor life. Their children have hardly any opportunity to receive education; moreover, they don’t have any religious freedom. In order to ensure that their children have a good future, many parents take great risks to send their children to a “snakehead” who can help them cross the border to the Dalai Lama. Thus that is why majority of the refugee group are young people or even children. This kind of escape normally happens during the winter, when the security guards at the boarder are fewer. Every year there are as many as 2,500 Tibetan refugees that cross the boarder illegally. To date, of six million Tibetans, over 130,000 have successfully escaped to India or Nepal.

After his return to Denmark, Maina saw on TV that the Chinese regime claimed that the incident was one of self-defense, ostensibly because Chinese soldiers were under attack. “But, the Romanian Sergiu Matei who was with me at the time was a photographer for a Romanian TV company. He photographed the whole shooting event. A Danish TV station purchased that video and it was broadcasted on TV2 and DR. These videos tell the full story on how the crime was committed, and it also put paid to Chinese government’s claim of so-called ‘self-defense by the border security,'” said Maina.

“Everybody can view the video clip on the web at www.mounteverest.net or www.protv.ro/filme/exclusive-footage-of-chinese-soldiers-shooting-at-tibetan-pilgrims.html [view site here] ,” Pierre suggested.

This short video clearly records the incident that day. On snow-covered ground, over 20 Tibetan refugees lined up and walked with great difficulty. All of sudden, one of them, walking in the front, staggered and then fell to the ground. The camera moved to a Chinese soldier who was opening fire. The Tibetans didn’t stop despite the gunfire. They didn’t even turn back; instead they chose to continue to walk forward quickly. Soon after, three Chinese soldiers approached the Tibetan refugee on the ground. They examined the body for a while, then tuned back and left without any emotion. From their behavior, what is certain is that the Tibetan on the ground had already died. The video also shows a Chinese soldier smoking and taking a rest after “completing the task.” The video also shows a Tibetan refugee who escaped to hide in the restroom at the mountain climber’s campground.

“At night, after getting food and clothes from the mountain climbers, this Tibetan refugee continued on his adventure of crossing the boarder. I don’t know whether he succeeded,” Maina said with concern. “Some Chinese soldiers saw that we witnessed their shooting because we were not too far away. But they didn’t avoid the shooting at all, almost as if we were not around.”

“The second day, a large group of soldiers came. Apparently, they were looking for the dead body. Those soldiers emotionlessly threw the body into the cracks of the icy river. They didn’t care that we were watching them,” Maina recalled, as he grew even sadder.

“Before, I heard that the human rights problem is very serious in China. But in Western society, many people are saying China is becoming better. This time I witnessed how the Chinese communist regime treats Tibetan refugees. I was very shocked. I realized that the situation in China has in fact not improved.”

Because of altitude sickness, Maina was unable to make it to the summit. However, after the shooting, he conquered his own fear and firmly stood up. Since his return to Denmark, he constantly receives phone calls. Many media inside and out of Denmark are contacting him for interviews.

When I asked Maina whether he felt scared, he said, “Yes, maybe I will be scared of going to China. I don’t know what strange things might happen.” But Maina didn’t hesitate and chose to tell his own experience to the public. He said, “The West still doesn’t know what is happening in China. People must know the truth. If I can do a little bit, I will do it.” After Maina exposed the shooting, not only did he obtain encouragement and support from his wife, he also has received many supportive messages from friends. “I have heard many people discussing whether to boycott 2008 Olympic games in Beijing,” Maina said.

Maina’s choice to speak out has generated a big reaction in Danish society. The Danish government said that they would treat this incident seriously and pressure the Chinese regime.

When asked about his future plans, Maina said that he would continue to support the Tibetans. “If the Danish government needs me to do anything to help, I will try to do the best I can,” he responded simply.