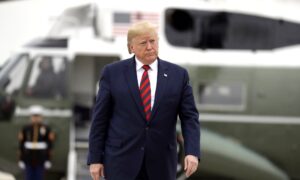 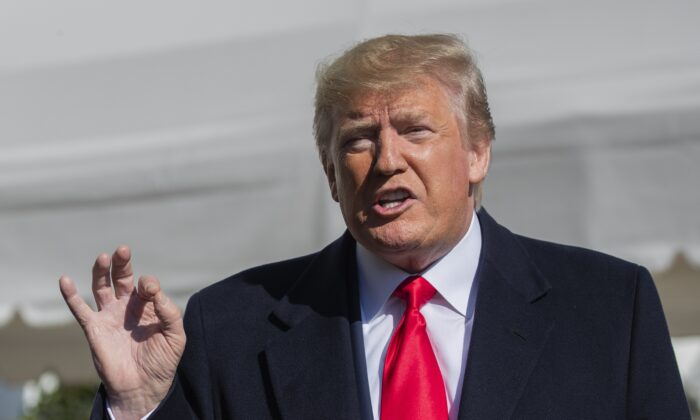 ‘I Have the Real Polls’ on Impeachment, Trump Says

Republican President Donald Trump said that polling he’s seen indicates the public is against the impeachment effort against him, as he criticized a recent Fox News poll that showed 49 percent of respondents think Trump should be impeached.

House Democrats are trying to remove Trump from office in an effort that is unilaterally opposed by House Republicans. Two House Democrats also voted against the impeachment resolution.

“You’re reading the wrong polls,” Trump told reporters on Nov. 3 when asked about the polls outside the White House. “I have the real polls. The CNN polls are fake. The Fox polls have always been lousy. I tell them they ought to get themselves a new pollster.”

The “real polls” he saw showed “people don’t want anything to do with impeachment,” Trump added.

In a poll released by Fox in early October, 48 percent of respondents were going to vote in the Democratic primary, versus 37 percent in the Republican primary.

In the latest poll, a total of 49 percent of respondents were either “solid” Democrats or “lean” toward the left, while 41 percent were “solid” Republicans or “lean” to the right. That discrepancy was also about the same as the last poll, and prior polls conducted for Fox stretching back to May.

An analysis conducted earlier this month by the New York Post found that the early October poll, if weighted for party affiliation, would have brought the 51 percent expressing support for impeachment to 44.9 percent.

Other polls have also polled more Democrats than Republicans. A survey conducted for NBC News and The Wall Street Journal, for instance, polled 414 Democratic primary voters and just 306 other registered voters.

Polls in battleground states have shown lower levels of support for removing Trump.

Majorities in Arizona, Florida, Michigan, North Carolina, Pennsylvania, and Wisconsin told Siena College and The New York Times that they were against impeaching Trump and removing him from office.

Overall, 52 percent of voters said they support the impeachment inquiry while 44 percent said they were opposed to it.

Some 47 percent of respondents also said that it was a typical political action for Trump to ask Ukraine to probe former Vice President Joe Biden over Biden’s threatening to withhold $1 billion in aid from the country in 2016 to force President Petro Poroshenko to oust Viktor Shokin, the prosecutor who was probing Burisma. Biden’s son Hunter Biden was on the board of Burisma from 2014 to 2019.

There were at least four percent more respondents who voted for Trump than Hillary Clinton in all of the states, except for Pennsylvania, which was the same amount for each contender. Siena and The New York Times said voters were weighted within each stage, including by party imputation.