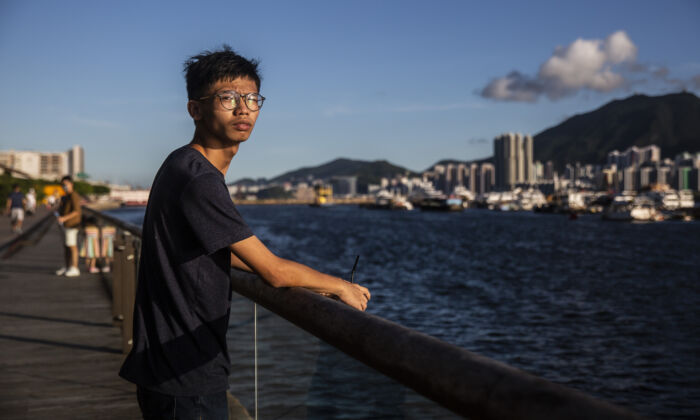 Teenage democracy activist Chung, 20, poses near the sea in Hong Kong on Aug. 8, 2020, before he was arrested. (ISAAC LAWRENCE/AFP via Getty Images)
HK Current Affairs

‘I Have a Clear Conscience’: Hong Kong Activist Pleads Guilty to Secession Under Beijing-Imposed Security Law

A Hong Kong student activist pleaded guilty to charges of secession under the Beijing-imposed national security law, as well as a count of money laundering, at a trial on Nov. 3.

Tony Chung, 20, was denied bail after he was arrested in October last year. Local media reported at the time that he was taken away, along with two others, from a coffee shop close to the U.S. consulate by unidentified men, and was believed to be preparing for an asylum application.

Chung, the former leader of the now-disbanded pro-independence organization Studentlocalism, faced four charges at the District Court. He pleaded not guilty to two charges—conspiracy to publish seditious materials and a count of money laundering—and pleaded guilty to two others.

“I plead guilty, and I have a clear conscience,” Chung said, after being asked about the charge of secession. The national security judge, Stanley Chan, interrupted him soon after, saying no political declarations were allowed.

Chung then pleaded guilty to another charge of money laundering relating to donations of more than HK$133,000 ($17,000) he received via PayPal.

Sentencing is set for Nov. 23.

Under the national security law, Chung faces up to seven years in prison. The sweeping law, imposed by Beijing in June of last year, criminalizes four vaguely defined categories of offenses, including secession, subversion, and collusion with a foreign country. Persons found guilty can face up to life in prison.

In July’s first national security trial, the local court sentenced Tong Ying-kit, who rode a motorcycle carrying a banner bearing the slogan “Liberate Hong Kong, revolution of our times” in a 2020 protest, to nine years in prison. Tong was convicted of incitement to secession and engagement in terrorist acts under the national security law.

Since the enactment of the law, Hong Kong has taken a swift authoritarian turn, with most democratic politicians now in jail or in self-exile, dozens of civil society organizations folding, and international rights groups leaving the city.

Activists and Western countries have criticized the law as eroding basic freedoms, such as those of expression and assembly, which China’s ruling communist regime promised would last for 50 years when the former British colony was handed over to Beijing in 1997.

The Hong Kong Epoch Times staff and Reuters contributed to this report.