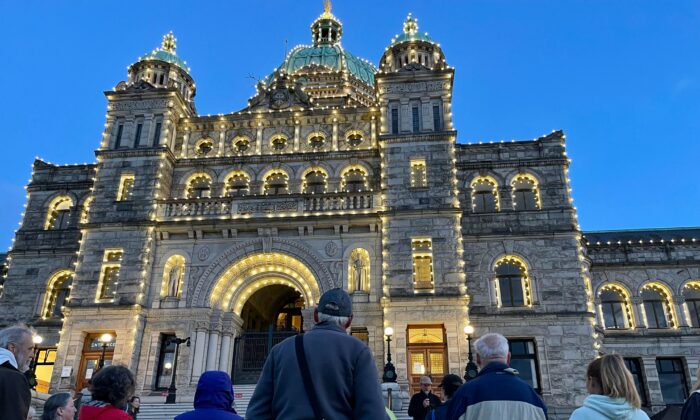 ‘I Don’t Want Them to Be Forgotten’: Vaccine-Injured Canadians Receive Support From Multiple Groups, Individuals

Ron Nigut is a familiar face outside his BC MLA’s constituency office. Since his wife, Susan Hiebert, passed away in December 2021, he has made the hour-long trek most weeks from his home in Bowser, B.C., to Minister Josie Osborne’s locale in Port Alberni, holding a sign seeking recognition for his wife.

Nigut says Hiebert officially died of cancer. But he says he noticed his wife’s condition immediately worsened after she received a COVID-19 vaccine. He says he has been trying to confirm this with the medical community and government authorities, but his attempts to get answers have been ignored.

“I just kept denying it,” Nigut said in an interview with The Epoch Times. “It can’t be. The government wouldn’t do this to us. Our health-care system wouldn’t do this.”

He says he now silently tries to raise awareness about his plight with signs.

Many other organizations and individuals are also finding a variety of ways to help bring attention to cases like Nigut’s.

Ten days after receiving the AstraZeneca COVID-19 vaccine, Langley, B.C., resident Shaun Mulldoon was in hospital with a reported massive blood clot. He would eventually have close to 7 feet of his intestines removed. In a chance meeting, filmmaker Robert Bailey heard his story and felt a calling to produce a five-minute segment for YouTube.

Despite being limited to private viewings, YouTube took down the video and labelled it as misinformation, Bailey said. So he put in more research and content and is in the final production of a 30-minute film he hopes will be ready in three weeks.

“God has given us all skills, talents, or gifts, and I think that it would be morally wrong if I didn’t use mine,” he told The Epoch Times.

As for people like Mulldoon and Nigut, Bailey described them as being expendable by a society that doesn’t want its tragedies made public because if told, they may create vaccine hesitancy.

“It’s like they don’t exist, like they’ve been forgotten and swept under the rug for the greater good,” he said.

“But I don’t want them to be forgotten. These are human beings and a lot of them did this for the best possible reasons and they thought they were doing their part. But as soon as they got hurt, it’s like, boom, you get pushed to the side. Or even worse, you just get gaslighted.”

Bailey has put the trailer for his documentary, “Vaccine Induced,” on his GiveSendGo account.

In Northern Ontario, Cara McMinn is riding her bicycle on her “Tell Your Story: Memorial Ride.” She began her cross-Canada bike journey on April 26 from Courtney, B.C., and aims to arrive in Ottawa on July 16.

Like Bailey, she was moved to find her own method to raise awareness of vaccine deaths and injuries, honouring Canadians who experienced adverse effects from the COVID vaccines.

“Doctors have been bullied into keeping their lips zipped, and the media won’t report on cause and effect, or vaccine morbidity, and so here we are dealing with this, really, on a community level,” McMinn said in an interview.

“Our government isn’t supporting people in the health-care system who are dying and who are becoming injured and suffering, so I felt very strongly that message should get out.”

Most people have been encouraging and thankful, McMinn said, adding that the injured deserve the praise.

“I’m doing what I love. These other folks, they are experiencing the hardship. They’re the ones who are the heroes,” she said.

Still, many of the people who share stories with her about their family members are afraid to let her tell those stories publicly, McMinn said.

“I would ask for an interview and they would say, ‘No, we cannot do that. We would be risking our relationship with our family,’” she said.

McMinn’s goal is to eventually establish a permanent memorial for the vaccine-injured. She is chronicling her experiences through her online channel, “Tell Your Story: Memorial Ride.”

One of the early pioneers to give voice to people who had adverse reactions after COVID-19 vaccination was Take Action Canada. In September 2021, the group created sorryigotvaxxed.com, an online forum for the vaccine-injured to tell their stories.

One of its founders, Ryan Penn, described in an interview with iHeartRadio the need for the website, because his interpretation of the Vaccine Adverse Event Reporting System (VAERS) told him people needed a platform to speak out.

“If you look at the VAERS database, which is the American vaccine adverse reaction database, and the European database, … this vaccine has had more injuries and deaths than all vaccines in human history combined for the last 17 years,” Penn said.

Priscille Belisle is a volunteer with the Canada Health Alliance (CHA). On June 10 in Winnipeg, CHA in partnership with Vaccine Choice Canada held their first candlelight vigil to pay homage to those who have lost their lives or suffered because of vaccine injuries or COVID mandates. They have since had seven more vigils across the country with plans to hold them regularly.

Speaking to The Epoch Times, Belisle highlighted the need for Canada to bring humanity back to the conversation when people feel alone and abandoned, especially when their story is rarely acknowledged.

“These are simply just stories we want to share, collect, and just try to find a meaningful way to allow others to say, ‘Oh, I’m not alone,’ and that’s huge,” Belisle said.

“That part by itself—just feeling like that process of saying, ‘I’m not alone. There’s other people, too, that are experiencing this’—that’s the first step for a lot of people.”

Health Canada recently established the Vaccine Injury Support Program to give no-fault compensation to victims. The program began accepting claims on June 1, and according to its website, 774 claims have been made to date. Most are in the review or information collection stages, and eight have been approved for compensation.

The Epoch Times reached out to Health Canada for comment but did not get a response by press time.