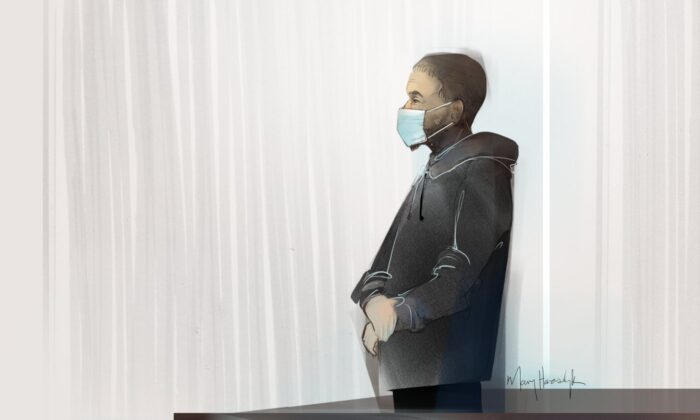 Hussein Borhot is seen in a courtroom illustration in Calgary on April 28, 2022. (The Canadian Press/Mary Haasdyk)
Canada

A man who admitted to terrorism-related acts with ISIS told a judge Thursday he didn’t know any better.

Hussein Borhot, 36, pleaded guilty to one count of participating in terrorism group activity between May 9, 2013, and June 7, 2014, as well as to kidnapping for a terrorist group while in Syria.

RCMP arrested him in July 2020 after a seven-year investigation.

An agreed statement of facts read in a Calgary courtroom said Borhot travelled to Syria through Turkey to join ISIS. He signed up as a fighter, received substantial training, and excelled as a sniper.

He did not tell his wife or father in advance of the trip, said the document.

Court heard that Borhot revealed much of the information to an undercover officer after he returned to Canada.

“Borhot said he prays to kill non-believers and then they kill him and so he can go to jannah (paradise),” said Crown prosecutor Domenic Puglia as he read the details in court.

“Borhot also said that if he had an opportunity to go back, he would go. He said: “Anything for deen (faith), for religion, anything.”

Court heard that Borhot told the officer that he and some other ISIS fighters travelled to a village, where they kidnapped a number of opposing fighters.

He told the officer that he had sworn an oath of allegiance to ISIS and had a close call upon arriving back in Calgary when he was found to be carrying documentation from the group.

“Borhot thought he was done when they found it, but Allah was with him. Borhot said that Allah blinded the authorities not to see it,” Puglia said.

He said Borhot told the officer that “he loved shooting and jihad (religious struggle), while mimicking the movement of holding a machine-gun in his hand.”

When asked by Court of Queen’s Bench Justice David Labrenz whether the facts were correct, Borhot replied that they were, but said, “I didn’t know better.”

His lawyer said outside court that Borhot wanted to do the right thing.

“He’s grown a lot since then. What he did was terrible. He acknowledges he did some heinous and terrible things and he’s here to be punished.”

Borhot had been free on bail with strict conditions, including wearing ankle-tracking devices, not applying for travel documents, and heeding a ban on having firearms, ammunition, or explosives.

A four-week trial was to begin Nov. 21. The case is to be back in court May 26 for sentencing.

Prosecutor Kent Brown hopes the case will act as a deterrent.

“We hope that this process has the effect of deterring others from engaging in the same kind of behaviour,” he said.

Brown said there is to be a joint submission to the court on sentencing. The maximum sentence for participating in terrorism group activity is 10 years, but the maximum for the kidnapping is life in prison.

He had a trial date scheduled for October, but is searching for a new lawyer. He is to return to court May 13.