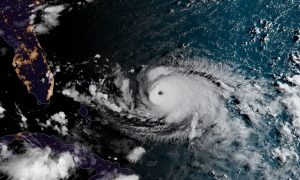 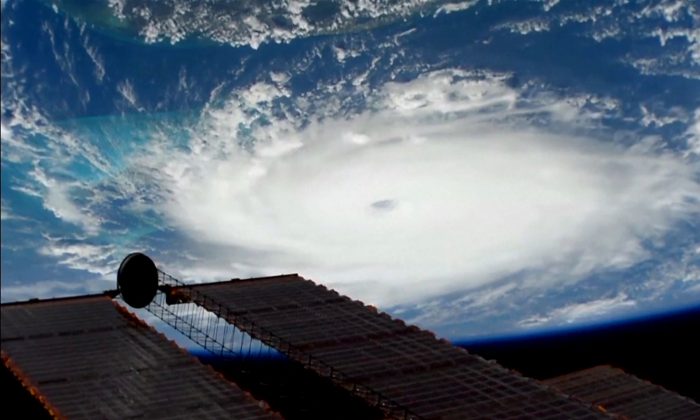 Hurricane Dorian is viewed from the International Space Station on Sept. 1, 2019. (NASA/Handout via Reuters)
US News

Hurricane Warnings in Effect for Parts of Florida Due to Dorian

Hurricane warnings are now in effect for portions of Florida’s east coast as Hurricane Dorian slams the Bahamas.

At 5 p.m., the National Hurricane Center (NHC) said that Dorian is located over the Abacos Islands in the Bahamas and is 95 miles east of Freeport, Grand Bahama Island. It’s also located some 175 miles east of West Palm Beach, Florida.

The storm has maximum sustained winds of 185 mph.

“A hurricane warning has been issued from Jupiter Inlet to the Volusia/Brevard County Line” in Florida, the NHC also wrote.

A storm surge warning was also put in effect “from Lantana to the Volusia/Brevard County Line” in Florida, it said.

A hurricane watch is in effect from the “Volusia/Brevard County Line to the Flagler/Volusia County Line,” according to the bulletin.

In Florida, mandatory evacuations were in place for parts of Palm Beach County for zones A and B for 1 p.m. Sunday, the Weather Channel reported.

Residents living east of Indian River County have to evacuate at 8 a.m. on Monday.

Mandatory evacuations were also issued for Brevard County for people living on the barrier islands and other flood-prone areas at  8 a.m. Monday.

Mandatory evacuations are in place for St. John’s County for zones A and B at 8 a.m. Monday, according to the Weather Channel.

“Volusia County says mandatory evacuations will begin at 10 a.m. Monday for residents on the beachside, in low-lying areas, & in RVs and mobile homes throughout the County,” the Channel said.

And Nassau County ordered evacuations in Zones A, C, and F that started at 8 a.m. Monday.

Hurricane warnings are still in effect for the northwestern Bahamas.

The NHC’s cone of probability shows the storm getting dangerously close to Florida’s coast by 2 p.m. on Tuesday before heading north. Then, by 2 p.m. Thursday, the storm is forecast the affect North and South Carolina as well as Georgia.

Bahamian Prime Minister Hubert Minnis said in a nationally televised news conference that a “deadly storm and a monster storm” was battering the region. The islands’ homes are built to withstand winds of at least 150 mph (241 kph), but the 20-foot (6-metre) storm surge is higher than the average roof.

“This will put us to a test that we’ve never confronted before,” he said. “This is probably the most sad and worst day of my life to address the Bahamian people. I just want to say as a physician I’ve been trained to withstand many things, but never anything like this.”