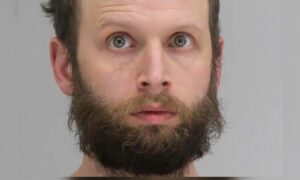 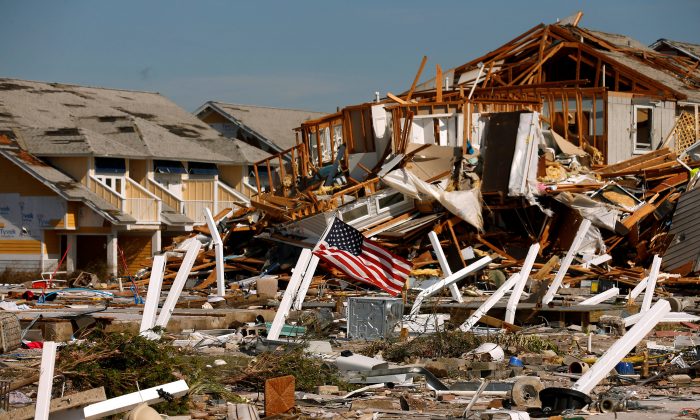 An American flag flies among the rubble left in the aftermath of Hurricane Michael in Mexico Beach, Fla., on Oct. 11, 2018. (Jonathan Bachman/Reuters)
US News

PORT ST. JOE, Fla.—Hurricane Michael’s violence was visible on Oct. 11 in shattered Florida coastal towns, where rows of homes were ripped from foundations and roofs were torn off schools by the near-record-force storm blamed for seven deaths.

Michael smashed into Florida’s northwest coast near the small town of Mexico Beach on Oct. 10 with screeching 155 mile per hour winds, pushing a wall of seawater inland.

“The wind was really tearing us apart. It was so scary you’d poo yourself,” said retiree Tom Garcia, 60, who was trapped inside his Mexico Beach home as water poured in to waist height.

He and his partner Cheri Papineau, 50, pushed on their door for an hour to stop the storm surge bursting in as their four dogs sat on top of a bed floating in their home.

The beach town looked like it had been carpet bombed, with little left in the first blocks from the beach. Further inland, about half the homes were reduced to piles of wood and siding.

Cheryl Shipman, 72, pointed to a few broken red wooden boards, saying “this used to be my three-storied house.”

Michael, the third most powerful hurricane ever to hit the U.S. mainland, weakened overnight to a tropical storm but marched northeast, toppling trees with 50 mph winds and bringing “life-threatening” flash flooding to Georgia and Virginia, the National Hurricane Center (NHC) reported.

At least seven people were killed by the storm in Florida, Georgia, and North Carolina from falling trees and other hurricane-related incidents, according to state officials.

Many of the injured in Florida were taken to hard-hit Panama City, 20 miles northwest of Mexico Beach. Gulf Coast Regional Medical Center was treating some, but the hospital evacuated 130 patients as it faced challenges of running on generators after the storm knocked out power, ripped off part of its roof and smashed windows, a spokesman for the hospital’s owner HCA Healthcare said in an email.

Buildings in Panama City were crushed, tall pine trees were sent flying and a steeple was knocked off a church.

At the city’s Jinks Middle School, the storm peeled back part of the gym roof and tore off a wall. A year ago the school welcomed students and families displaced by Hurricane Maria in Puerto Rico.

“I have had employees going to the communities where our kids live, going door to door and checking,” Principal Britt Smith by phone. “I have been up since 3:30 or 4 a.m. emailing and checking on staff to see if they are safe. So far, everybody seems to be very safe.”

Fast-moving Michael, a Category 4 storm on the five-step Saffir-Simpson hurricane scale when it came ashore, its sustained winds were just 2 mph (3.2 kph) shy of an extremely rare Category 5. It was about 20 miles northwest of Raleigh, North Carolina, at 5 pm EDT  and set to speed up as it headed for the Atlantic coast, the NHC said.

The storm’s intensity waned steadily as it pushed inland and curled northeasterly into Georgia after dark. It was downgraded to a Category 1 storm, with top sustained winds diminishing to 75 miles per hour (120 kph), about nine hours after it made landfall.

Nearly 950,000 homes and businesses were without power in Florida, Alabama, the Carolinas, and Georgia on Oct. 11.

The number of people in emergency shelters was expected to swell to 20,000 across five states by Oct. 12, said Brad Kieserman of the American Red Cross.

The governors of North and South Carolina urged residents to brace for more heavy rain and storm-force winds as Michael plows northward up the Atlantic seaboard. The Carolinas are still reeling from severe flooding in the aftermath of Hurricane Florence less than a month ago.

Michael pummeled communities across the Panhandle and turned streets into roof-high waterways.

Much of downtown Port St. Joe, 12 miles east of Mexico Beach, was flooded after Michael hit with 155 mph winds, snapping boats in two and hurling a large ship onto the shore, residents said.

“We had houses that were on one side of the street and now they’re on the other,” said Mayor Bo Patterson, who watched trees fly by his window as he rode out the storm in his home seven blocks from the beach. Patterson estimated 1,000 homes were completely or partially destroyed in his town of 3,500.

Michael also disrupted energy operations in the U.S. Gulf of Mexico as it approached land, cutting crude oil production by more than 40 percent and natural gas output by nearly one-third as offshore platforms were evacuated.

With a low barometric pressure recorded at 919 millibars, a measure of a hurricane’s force, Michael was the third strongest storm on record to hit the continental United States, behind only Hurricane Camille on the Mississippi Gulf Coast in 1969 and the Labor Day hurricane of 1935 in the Florida Keys.