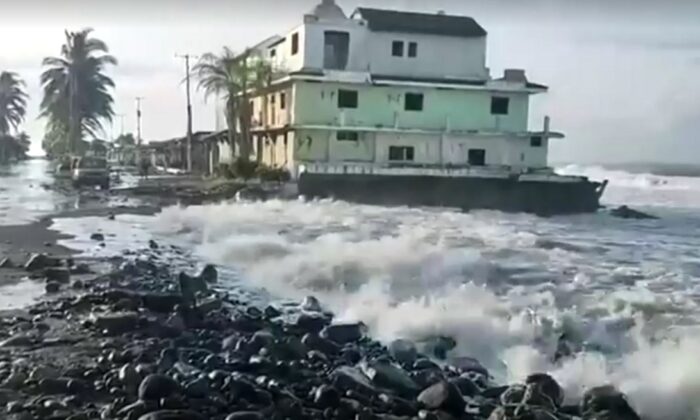 Hurricane Kay weakened slightly by Wednesday afternoon, authorities said, as the Category 2 storm headed closer to Mexico’s Baja California peninsula, causing flight cancellations throughout the region. It’s expected to pass near the southern coast of California over the next few days.

As at 5 pm ET, the storm was located over the Pacific Ocean some 205 miles (335 kilometers) west-southwest from the tip of the peninsula, home to the beach resort Cabo San Lucas, according to the Miami-based National Hurricane Center (NHC).

Although it is forecast to continue weakening, Kay is expected to remain a large hurricane when it passes near the west-central coast of the Baja California peninsula, the NHC said.

Kay is expected to weaken to a tropical storm as it moves closer to California.

It will be the closest pass for a hurricane along the U.S. border with Mexico in 25 years.

A meteorologist from the national weather service says only 16 tropical systems have come within 250 miles of San Diego since 1950.

The government of Mexico has issued a hurricane warning from north of Punta Abreojos northward to San Jose De Las Palomas. Additional tropical storm watches and warnings have also been issued Wednesday morning.

Mexican airlines VivaAerobus, Volaris and Aeromexico said in statements that Kay had prompted cancellations of domestic flights to the popular tourist region of Los Cabos.

Strong winds and heavy rains are expected to spread across the Baja California Peninsula and continue the next few days as the center of Kay is expected to travel northward, just west of the peninsula, through Friday. The storm will make its closest approach and perhaps make landfall on the central portion of the peninsula late Thursday.

Winds will be strongest at the center of the storm and impacts on land will depend on how close Kay gets. Heavy rainfall and flash flooding will be a concern regardless of landfall. Baja California Peninsula can expect 6 to 10 inches of rain with isolated amounts of 15 inches, while northwest mainland Mexico is forecast to see 2 to 4 inches, isolated area up to 6 inches through Saturday.

Rainfall is also expected to reach southernmost California with 2 to 4 inches and pockets of up to 6 inches possible Friday and Saturday.

Over the weekend, Kay damaged houses, felled trees and overflowed rivers in the state of Guerrero and in the port of Acapulco, on the Pacific Coast.