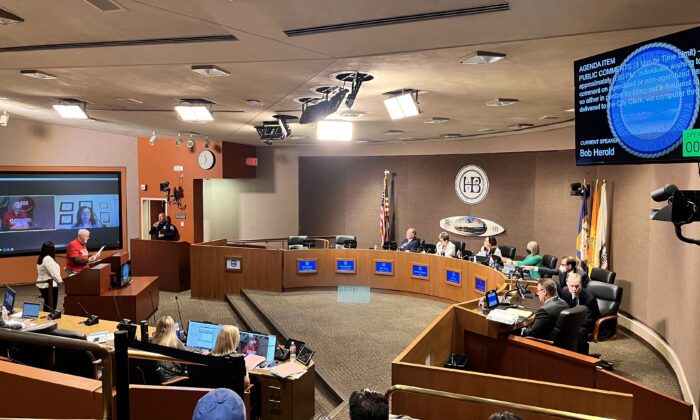 HUNTINGTON BEACH, Calif.—Voters will decide in November whether to give the city council authority to sidestep the elected city attorney by hiring outside legal counsel.

The city council voted for the ballot measure June 21, among a few others.

Huntington Beach City Attorney Michael Gates told The Epoch Times this would give the city council “unbridled authority” over the city’s legal business, which “undermines the people’s choice in who the city’s attorney really is.”

“The city charter and vote of the people designate me as the only legal, the exclusive, legal counsel for the city, no one else,” Gates said.

This comes following weeks of disapproval from residents about the city council’s interest in changing the elected city attorney’s position to appointed, though the council ultimately decided against it.

Several residents in the public comment portion of the meeting claimed the council thought voters were not wise enough to elect the best officials.

But Councilman Dan Kalmick said, “I think our residents are not stupid.”

He said the city attorney as a department head should be appointed just as other roles are in the city, such as the Chief of Police.

“The city attorney is not the independent watchdog of the city council” because they can’t act without following council rules, Kalmick said.

“It is a technical position,” Moser told the council, and “we want to make sure we aren’t acting based on a couple people, but rather [choosing] from a pool of good candidates” they consider are in the public’s best interest.

In the end, the council compromised that they didn’t care whether the city attorney’s position was elected or appointed, just that the position was filled with the ideal professional individual. They also agreed term limits weren’t necessary.

“You’re free to advise and we’re free to accept or reject your advice,” Mayor Pro Tem Mike Posey said to City Attorney Gates at the meeting.

In response, Mayor Barabara Delgleize said, “At the end of the day … asking for a second opinion doesn’t take … authority away from the city attorney.” Delgleize referenced how normal client-attorney relationships allow clients the ability to consult a second attorney.

According to the council, because they already hire outside attorneys, this ballot wouldn’t be much of a change, it would only clarify that the council is in control of all legal business in the city.

“We hire outside legal all the time,” Councilwoman Carr said, complimenting Gates for his service, but adding that it is impossible for the city to solve all legal issues in-house.

But Michael Gates said outside counsel is only hired “minimally.”

“If I need a specialist, I hire sparingly on a consultation basis only, just a few hours at a time in order to spare taxpayer expense … Otherwise we do all legal work in-house,” he said.

Voters will also choose to either keep electing their city clerk and treasurer or if they should be appointed by their city councilors.

The next steps are for city staff to prepare and return final written ballot measures for council consideration at the July 5 meeting.