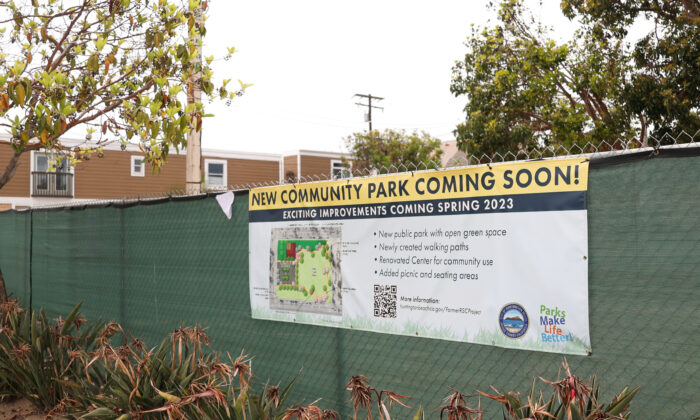 A new community park at the crossing of 17th Street and Orange Avenue in Huntington Beach, Calif., is under construction on June 10, 2022. (Julianne Foster/The Epoch Times)
Orange County Community

HUNTINGTON BEACH, Calif.—Huntington Beach councilors unanimously approved “17th Street Park” as the new name for a park to be reconstructed at the former site of Michel E. Rodger’s Senior Center during the June 7 city council meeting.

The naming of the park—at the crossing of 17th Street and Orange Avenue—has been an ongoing discussion since 2017, according to city records. On June 7, councilors voted 7–0 to name the park “17th Street Park”—as a tribute to the site’s history.

Long before it became a senior center, the site was originally a park named “17th Street Park” with a ball field and playground.

“Times change, people die, but the land remains the same,” Barbara Haynes, the past Chair of the Historic Resources Board, told the council at the meeting.

Haynes supports the restoration of the name because “that is what the park is referred to” from city council records as early as 1919 to the current date.

A newspaper clip from the Los Angeles Times published on Nov. 8, 1934, paid tribute to the first “Seventeenth Street Park” when increasing oil development in the area caused the park to “lose popularity” at the time.

In 1948, the city decided to construct a recreation building on the site for community use and to house the city’s Parks and Recreation Department.

Later in 1975, the building was modernized and dedicated as a senior center. In less than a decade, it was renovated again to include an assembly hall and renamed the Michael E Rodgers Senior Center to honor Rodgers’s contribution to the community.

Michael E. Rodgers was a prominent advocate for senior citizens in Huntington Beach and lobbied for constructing a senior center at the site. He was also a founding member of the Huntington Beach Council on Aging and a member of Huntington Beach Citizen’s Participation Advisory Board and Orange County Transportation Authority’s Board of Directors.

Most of the building structures that housed the former senior center have been demolished in March to pave way for the new 2.01-acre park, which will provide open green space in a largely populated area of the city—with walking paths and picnic areas.

Only a section of the original building structures was preserved and will be renovated to doubly serve as an American Legion Post and a community center.

As for naming the community center, there have been several disagreements between councilors, city staff, and the public, considering its long history and the various past uses.

Councilman Erik Peterson said during the meeting the center should be named “Veteran’s Hall,” given that the building would be primarily used by the American Legion—which is based on a promise made by the city in the 1970s when the veteran’s hall on Main Street was taken away.

“I think it should be [named] ‘Veteran’s Hall’,” Peterson said, because “it honors a promise” and everything the Post has done for the community.

Peterson said he doesn’t want to take away what Rodgers had done for seniors, so he proposed the council name a room in the building after Rodgers with plaques detailing his contributions.

Residents in favor of naming the building after Rodgers want to honor his legacy at the original site of the senior center where he had the most influence, despite its relocation to Central Park off Goldenwest Street.

The council eventually decided to wait for city staff to provide more information regarding the different arguments before deciding on a name for the building.

The park is expected to be complete in spring 2023.