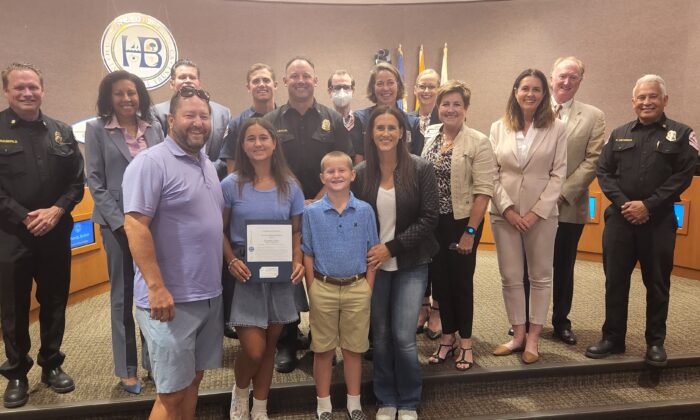 A 12-year-old junior lifeguard was awarded by Huntington Beach Mayor Barbara Delgleize for her heroic actions in saving the life of a drowning six-year-old boy earlier this summer.

Elizabeth “Lilly” Felten—a member of the Huntington Beach Junior Lifeguard program—attended on May 15 a pool party held by her brother’s baseball team, for which she serves as a bench coach.

As soon as a six-year-old boy was found to be face-down unconsciously in a pool, Elizabeth jumped in, attempting to pull the boy out of the water while screaming for help.

At the Aug. 2 city council meeting, she recalled how no one seemed to hear her over the sounds of the party while the boy was in her arms, eyes rolling back into his head, and foaming at the mouth. She started screaming “bloody murder” until one of the coaches and other parents rushed over to help.

Her father, as well as the boy’s father, managed to pull him out and proceeded to perform CPR, and the boy regained consciousness when the paramedics arrived, she said. He was admitted to the hospital and released the next day.

“Water safety is so important to me because I learned it all at [the Junior Lifeguard program], and it has inspired me to become a lifeguard when I grow up,” she said.

“We are just enormously proud of you, the actions you took, you are a young lady of consequence. … We hope you join our ranks as a lifeguard one day,” Leach said.

According to Leach, the city’s fire department has responded to several similar water safety calls in the past few months. He said anytime people gather around a pool and children are present, an adult should be tasked with keeping watch over them.

For children ages 1–14, drowning is the second leading cause of death after car crashes, according to the Centers for Disease Control and Prevention (CDC).

Nationwide, there are about 3,960 fatal unintentional drownings each year—an average of 11 drowning deaths per day, based on data released by the CDC.