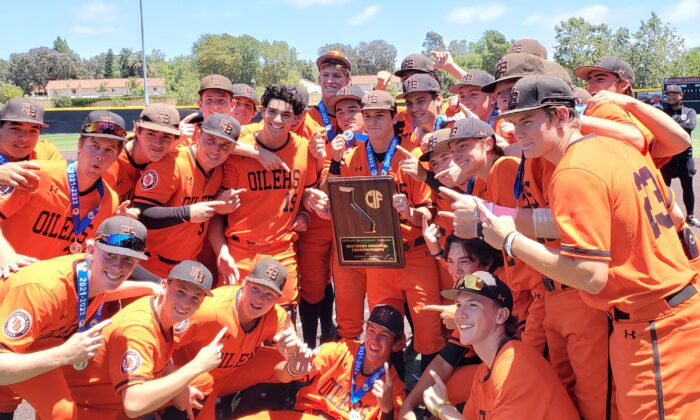 “Every single time we play JSerra, it’s a dogfight,” H.B. coach Benji Medure told The Epoch Times. “So my expectation was exactly this game, and there was no doubt in my mind it was going to be close. There was no doubt it was gonna come down to like the last couple innings.”

The Oilers senior right-hander, Matt Lopez (Northern Kentucky signee) pitched seven shut-out innings with four strikeouts, while giving up nine hits to get the win. He was relieved by Ben Jacobs (UCLA signee) in the eighth inning who would be credited with the save.

“I love these guys,” said Lopez to reporters. “I would have done anything for another game … three more, and came out with a title, I couldn’t be happier. It’s awesome!”

“Matthew has been one of our best pitchers all year,” said coach Medure. “We expected him to be tough. He hasn’t been sharp as of late. So for him to do that and hold them at zero for seven innings was not a surprise. But it was big. He stepped up in the moment.”

Offensively, Ralph “Ralphy” Velazquez, hit a two-run homer, with Aidan Espinoza on first, over left-field in the eighth inning to break the deadlock for the Oilers.

“My approach was going out to left field, the same side of the ball,” junior Velazquez told The Epoch Times. “I thought a curveball was coming on that pitch and [got a] good fastball. I knew I had a chance!”

“JSerra, they’re one of the best—we go back and forth all the time,” added Arizona commit Velazquez. “They’re a really good program.”

Velazquez leads the Oilers with nine home runs for the season.

“Ralph has been big for us all year,” stated coach Medure. “He’s our biggest bat, everybody knows it. So for him to hit a home run right there, it’s not a surprise. He’s done it before.”

In retrospect, Medure stated, “I’m really proud of our guys, can’t say that enough.” Regarding the future, “That starting lineup today, seven of those guys are coming back. We know we’re gonna be tough—it’s gonna be a battle. We’re gonna probably play these guys [JSerra] again. I just want to soak this up right now.”

JSerra won the Division I regional championship last year, and on May 20, followed with their first Division 1 CIF Southern Section championship, with a 3-1 win over Notre Dame Sherman Oaks.

In the first inning, Gough allowed runners on second and third with one out and kept the Oilers off of the scoreboard with a strikeout and an infield pop-fly.

Lions Head Coach Brett Kay stated that both teams had opportunities. “We made the mistake of attempting a squeeze play in the second, and Brandon Chang had a chance with bases loaded,” he told The Epoch Times.

JSerra junior third baseman, J.J. Hollis, led the Lions with a double, and a triple in the sixth inning. However, H.B. pitcher Lopez escaped by fielding a line drive and an infield pop-up to end the inning.

Kay admitted that he didn’t follow the team’s game-plan of “not allowing Ralphy [Velazquez] to beat us.”