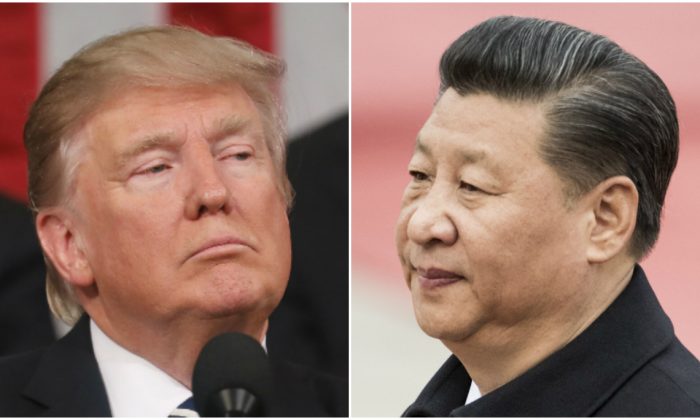 China in Context by Epoch Times Issue 28
By Larry Ong

Donald Trump and Xi Jinping are set to meet in person on April 6–7. Neither will want to walk away from Trump’s Florida country club empty-handed, especially given the domestic challenges both leaders face.

The Trump administration has met with stiff resistance from the Democratic Party. The FBI is investigating claims of collusion between the Trump campaign and Russia. Speaker of the House Paul Ryan’s alternative to Obamacare was withdrawn, after it failed to pass muster with a congressional caucus of conservative Republicans.

It is in Hong Kong where the Xi-Jiang struggle is most glaring.

Heavy endorsement from Jiang faction elites appears to have decided the Hong Kong chief executive election in favor of longtime government administrator Carrie Lam. Days before the election, however, envoys for Xi hurried to Hong Kong to clarify to electors that Xi didn’t have any preferred candidate and that electors could vote for whomever they wished, sources close to the Xi leadership told this newspaper. The Chinese officials who backed Lam didn’t speak for the Xi leadership, the sources added. Xi’s envoys told electors that Hong Kong must remain stable, at a time when U.S.–China relations are sensitive.

Jiang had clearly stolen a march on Xi in Hong Kong. The result of the election further alienated Hongkongers from the Chinese regime and contributed to already high tensions in the city. And U.S. Sen. Marco Rubio, chair of the Congressional-Executive Commission on China, has condemned Beijing for rigging the election.

At Mar-a-Lago, Trump could leverage concern over Hong Kong’s autonomy to pressure Xi into making a deal on two key issues—getting Beijing to rein in the rogue North Korea and cutting the massive trade deficit between China and the United States. Successful negotiations with Xi would allow Trump to claim to be fulfilling his campaign promises.

And Trump may yet find a willing helper in Xi.

Xi seems determined to neutralize the Jiang faction and consolidate his control over the Chinese regime during an important political reshuffle near the end of this year. But Xi cannot focus on that task with both a hawkish Trump administration and domestic political rivals constantly breathing down his neck.

So it’s likely that in exchange for curbing the Kim Jong-un leadership or reducing the trade deficit, Xi will demand that China and the United States foster healthy bilateral ties. In the short term, this might translate into the United States slowing down its deployment of the THAAD missile defense system in South Korea.

If Trump agrees to take a step back, it may buy Xi some goodwill from the Chinese populace and officialdom, allowing him to fully concentrate with the takedown of the remaining fractious elements in the regime.