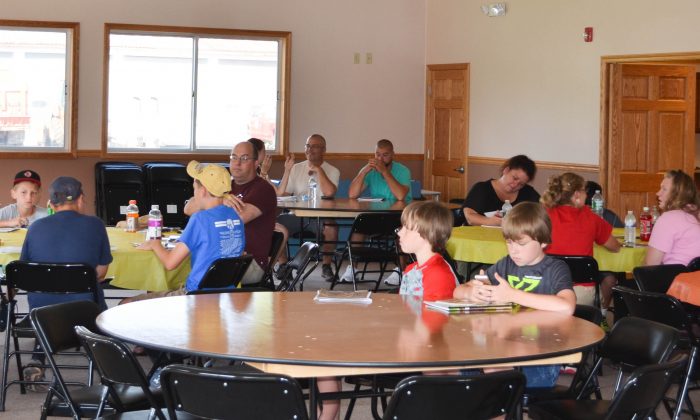 DEERPARK—As Orange County eases into autumn, hunters are thinking of the fall hunting season which, for firearms, begins on the third Saturday in November. As part of community outreach, District Attorney David Hoovler sponsored a four-hour hunter safety course in Deerpark for beginner hunters on Sept. 1 and 2.

Deerpark Police Officer Raymond Cirulli and Port Jervis Detective Michael Decker gave the course to a room filled with young hunters-to-be. Cirulli has been giving the course for four years but has been hunting since he was 14.

Some students come from a family of hunters and are familiar with firearms. “Other kids have never handled a firearm in their life,” Cirulli said. He estimates that Deerpark issues about 1000 licenses each year.

As an experienced hunter, Cirulli attests to the benefits of hunting. He says it controls the animal population, hunting is a good source of food, “and there’s nothing like the outdoors.”

Michael Amato, 11, came to the course with his mother. He practiced learning to shoot a firearm with a pump action Beebe gun. “We start him out on something he can’t get too hurt on,” his mother said. Michael hopes to someday bag a doe or a buck. He may be able to hunt turkey next spring after he turns 12. “His dad said he might take him out,” said his mother.

Hoovler said the hunter safety class is just one component of community outreach that is done throughout the county. The DA will make over 200 appearances in town fairs, town board meetings, and other places. “We just feel that this is a good way to reach the community.”

The state requires sportsman education courses to teach young hunters safe, responsible, and ethical hunting behavior. A certificate of completion is required to purchase a first-time hunting license. A person must be 11 to take the course.

The course by certified instructors covers how to handle firearms, proper gun storage, how to shoot straight, laws and regulations, how to identify wildlife, and the hunter’s responsibilities toward wildlife, the environment, property owners, and the public.

New York allows hunting of all kinds of wildlife when done in-season. Deer season opens on the third Saturday in November. The state allows hunting for black bear, wild turkey, and waterfowl such as ducks, geese, and brant. Migratory game birds such as woodcock, crow, rail, snipe and gallinule are allowed along with small game such as grouse, pheasant and quail, rabbits, and hare. The state sanctions hunting for bobcat, coyote, fox, raccoon, and weasel in part of the state.

The DEC now has a mobile app available for download on their website which will show a hunter a hunting spot near them using advanced GPS mapping features.

The class is an essential part of safe hunting in the outdoors. Hoovler hoped the knowledge gained in the class would be something the young people would keep with them. “I hope you gain something from this that you can take with you the rest of your life,” he said.