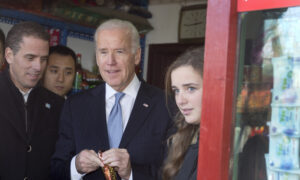 Biden, 49, requested a protective order for his financial records in the Arkansas Circuit Court of Independence, according to a copy of the filing obtained by the Daily Mail. He argues that his financial information would be used “maliciously” by media outlets if it was made public.

“The likelihood that [Biden’s] private records will be used in an inappropriate or malicious manner for reasons that have absolutely nothing to do with these proceedings is exceedingly high and should not be tolerated by the court,” the filing stated.

Disclosures of financial info would cause Biden “undue prejudice, annoyance, embarrassment, and/or oppression.”

“Due to the extraordinary circumstances surrounding the parties involved in this matter, it is in the interest of justice and necessary for a Protective Order to be in place,” Dustin McDaniel, one of Biden’s attorneys, wrote in the filing.

Biden said in a statement in the filing that he hasn’t been able to complete an affidavit of his financial situation—which was required by the court—because he hasn’t had a job since May and because he’s incurred “significant debts” partially stemming from his April 2017 divorce to Kathleen Biden. Those debts are still being calculated.

If the order is granted, any documents dealing with the finances of Biden or the mother of his child, Lunden Alexis Roberts, would be destroyed after being filed under seal and any digital copies would need to be placed under encryption.

Biden agreed to take a DNA test last month, months after Roberts claimed he was the father of her child. The DNA test showed “with scientific certainty” that Biden is the father of the girl, who was conceived while he was still married, according to a Nov. 20 court filing obtained by the Arkansas Democrat-Gazette. Biden “is not expected to challenge the results of the DNA test or the testing process,” the filing stated.

The baby’s “paternal grandfather, Joe Biden, is seeking the nomination of the Democratic Party for President of the United States of America,” the mother noted in the filing. “He is considered by some to be the person most likely to win his party’s nomination and challenge President Trump on the ballot in 2020.”

Roberts and the child live in Arkansas; she and Biden met in Washington. Roberts is asking for $11,000 in legal fees, in addition to child support. She reportedly agreed that the order to make Biden’s financial information secret was appropriate.

While a hearing in the case is slated for Dec. 2, Biden in the new court filing asked the court for a delay until the requested order is sorted out.

Joe Biden, 76, was asked about his apparent grandson after results of the DNA test were reported and lashed out at the reporter who queried him.