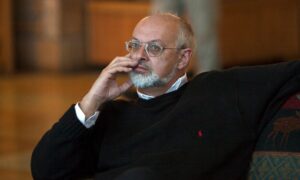 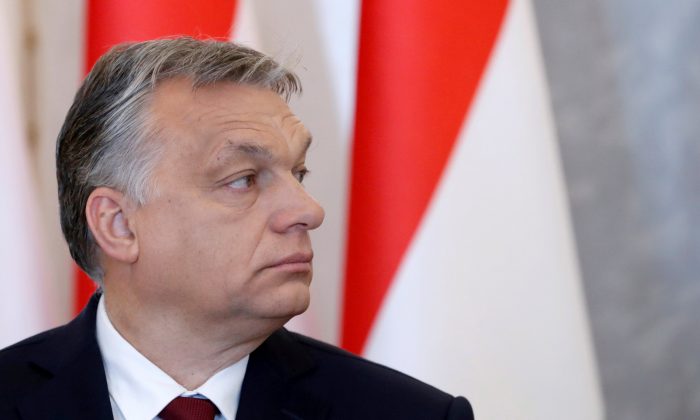 Hungarian Prime Minister Viktor Orban and Hungarian President Janos Ader (not pictured) give a statement to the media after their talks at the Presidential Palace in Budapest, Hungary, May 7, 2018. (Reuters/Bernadett Szabo)
Europe

BUDAPEST—Viktor Orban said on Monday the main task of his new government will be to preserve Hungary’s security and Christian culture, sticking to his nationalist policy to keep out migrants and fend off what he calls foreign meddling.

The prime minister, 54, was re-elected for a third straight term in an election last month after a strong anti-immigration message landed him a landslide victory.

One of the most vociferous opponents of immigration into Europe by mainly Muslim people fleeing war and poverty in the Middle East and Africa, Orban’s campaign—helped by his party’s media dominance—resonated with large swathes of the electorate, particularly in rural areas.

His Fidesz party now holds 133 of 199 seats in the new parliament that will enable Fidesz to pass any laws, even those that require the support of two-thirds of the votes.

“The main task of the new government will be to preserve Hungary’s security and Christian culture,” Orban told a news conference after he was asked by the president to form a new government.

Parliament will hold its first session on Tuesday where Orban will be officially elected prime minister again.

In a radio interview on Friday, Orban said his government was building a “Christian democracy”.

“We are working on building an old-school Christian democracy, rooted in European traditions … we believe in the importance of the nation, and in Hungary we do not want to yield ground to any supranational business or political empire,” Orban said.

He said any organisation involved in the migration issue would have to seek clearance from national security authorities.

One of the first new laws expected to be passed by parliament is a “Stop Soros” bill, which would impose a 25 percent tax on foreign donations to NGOs that back migration.