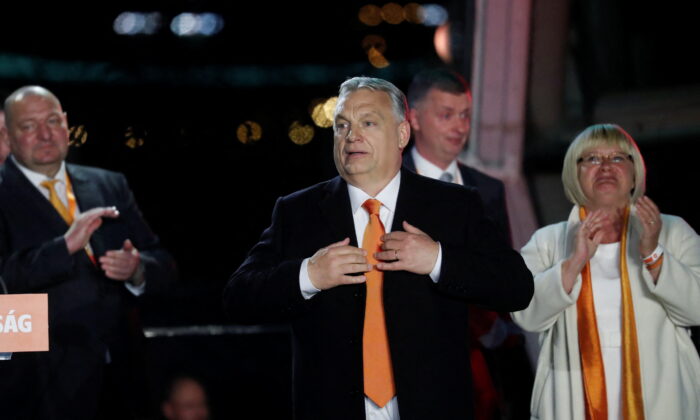 Hungarian Prime Minister Viktor Orban reacts in front of supporters after the announcement of the partial results of parliamentary election in Budapest, Hungary, on April 3, 2022. (Bernadett Szabo/Reuters)
Europe

“We have scored a victory so big, that it can be seen even from the Moon,” he said. “We have defended Hungary’s sovereignty and freedom.”

Based on preliminary results, the National Election Office said Fidesz would have 135 seats, a two-thirds majority, and the opposition alliance would have 56 seats.

“I don’t want to hide my disappointment, my sadness … We knew this would be an uneven playing field,” he said. “We admit that Fidesz got a huge majority of the votes. But we still dispute whether this election was democratic and free.”

The Organization for Security and Cooperation in Europe (OSCE) sent a full-scale election monitoring mission for the vote, only the second such effort in an European Union member state.

The election comes at a time when global energy woes and steep labor shortages in the region have fueled inflation increases throughout central Europe. Consumer price growth reached an almost 15-year high of 8.3 percent in February in Hungary.

Orban has condemned the Russian invasion of Ukraine, which the Kremlin describes as a “special military operation,” and has not vetoed any European Union sanctions against Moscow even though he said he did not agree with them.

But he has banned any transport of arms to Ukraine via Hungarian territory, and said benefits of close ties with Russia include gas supply security.