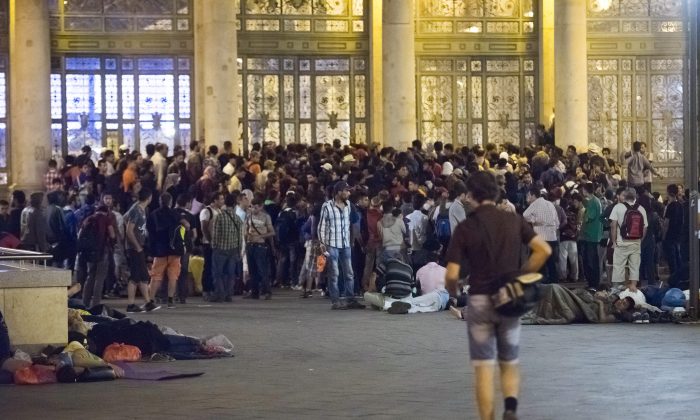 Migrants wait to board a train to Germany at the Keleti Railway Station in Budapest, Hungary, Tuesday morning, Sept 1, 2015. (Zoltan Balogh/MTI via AP)
Europe

BUDAPEST, Hungary—Hungary suspended all rail traffic Tuesday from its main terminal in Budapest and cleared the train station of hundreds of migrants trying to board trains for Austria and Germany — the hoped-for end destinations in their flight from turmoil in the Mideast and Asia.

Migrants chanting “Freedom! Freedom!” congregated outside the station after being pushed out of the building, joining hundreds more in what has become a transit zone and place of refuge for those fleeing Syria’s war and other hotspots.

Police acted shortly after authorities announced over station loudspeakers that all trains would be stopped from leaving for an indefinite period of time. Hundreds of passengers with travel documents and tickets remained in the cavernous station, some staring at information boards still showing arrival and departure times.

Scuffles broke out earlier Tuesday morning as some of the hundreds of migrants pushed toward metal gates at the platform where a train was to leave for Vienna and Munich, and were blocked by police. Several said they spent hundreds of euros (dollars) for tickets after police told them they would be allowed free passage.

The closure of the station appeared prompted in part by pressure from other European Union nations trying to cope with the influx of thousands of migrants flowing through Hungary. Europe has been overwhelmed by a surge of migrants, with over 332,000 arriving so far this year, according to the International Organization for Migration.

Police in Vienna said Tuesday that 3,650 migrants arrived Monday from Hungary at the city’s Westbahnhof station, with most continuing on toward Germany.

“Allowing them to simply board in Budapest … and watching as they are taken to the neighbor (Austria) — that’s not politics,” Austrian Chancellor Werner Faymann told state broadcaster ORF.

While critical of Hungary, Austrian authorities also acknowledged they were overwhelmed by the thousands who arrived by rail Monday evening. Police said they did not have the manpower to carry out effective controls, which normally would include turning back to Hungary those without proper travel documents who do not ask for asylum in Austria.

But in their search for human traffickers, Austrian authorities re-imposed controls at some of the main road border crossings from Hungary. Hungary’s Utinform, a traffic news agency, said vehicles entering Austria at the Hegyeshalom crossing on the main highway from Budapest to Vienna were backed up 6 kilometers (3½ miles) on Tuesday.

Many of the migrants had entered Europe through Greece and then traveled north through Macedonia and Serbia before reaching Hungary.

In Geneva, the U.N.’s children’s agency said the number of women and children fleeing through Macedonia has tripled in the past three months — up to 3,000 people a day are passing through and roughly one in eight is a pregnant woman.

Greece’s coast guard, meanwhile, said Tuesday it had rescued more than 1,000 migrants from the sea off its eastern Aegean islands in the last 24 hours.