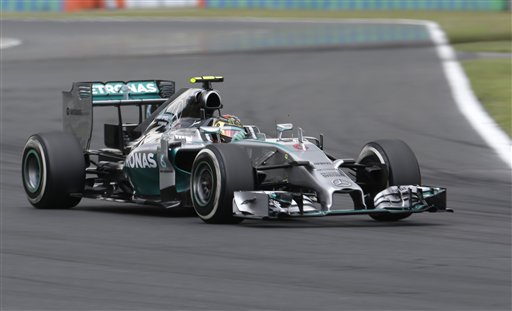 Mercedes driver Nico Rosberg of Germany steers his car during the qualifying of the Hungarian Formula One Grand Prix in Budapest, Hungary, Saturday, July 26, 2014. The Hungarian Grand Prix will be held on Sunday, July 27, 2014. (AP Photo/Petr David Josek)
Motorsports

The 2014 Hungarian Grand Prix is set for Sunday, July 27 at Hungaroring in Mogyoród, near Budapest.

It’s being broadcast Sky Sports F1 in the United Kingdom and NBC Sports Network in the United States, as well as Sky Sport in New Zealand, and Fox Sports in Mexico, Central America, and South America.

It will also be shown on RTL in Ireland, TSN in Canada, OTE TV in Greece, on M1 in Hungary, Sky F1 in Italy, MTV Max in Finland, Polsat Sport in Poland, SLO 2 in Slovenia, Sport1 in The Netherlands, BBC in Belgium, RTL or Sky Deutschland in Germany, Nova in the Czech Republic, TV3+ in Denmark, SportTV in Portugal, Abu Dhabi Sports 2 in the United Arab Emirates, and Star Sports 4 in India.

See the lineup and qualifying results, current Formula One standings, and a preview of the race below the circuit map.

F1 Standings — With Points Only

See a preview via the Associated Press below.

Ferrari gamble puts Raikkonen near back of grid

BUDAPEST, Hungary—Kimi Raikkonen has had little to celebrate in this Formula One season and an unsuccessful gamble in qualifying at the Hungarian Grand Prix on Saturday will likely extend his cheerless run.

With the Finnish driver in 14th place near the end of the first part of qualifying, Ferrari decided to keep Raikkonen on ice, hoping to save some tire wear, and betting that no one from the slower Caterham or Marussia teams would better him.

With six racers excluded after the initial qualifying stage, and Lewis Hamilton and Pastor Maldonado already out, Raikkonen, the 2007 world champion, seemed assured of at least 16th place and a spot in the next qualifying stage.

Marussia’s Jules Bianchi, however, managed a surprising lap of 1 minute 26:728 seconds, leaving Raikkonen 0.064 seconds behind him in 17th place out of 22.

While saying they will avoid a similar gamble again, Raikkonen appeared his usual unruffled self.

“The mistake’s been made and it’s been a difficult year anyhow, so I don’t see the point of shouting around,” said Raikkonen, whose best results this season are a pair of seventh-place finishes.

Raikkonen said that a team as experienced as Ferrari could have prevented the error but he tried to put it behind him.

“I have full belief in Ferrari. I enjoyed a lot of success before with them,” he said. “We have to look for reasons, make decisions, and fix things.”

The Hungaroring is a dusty track with many turns offering few opportunities to pass.

“It’s not an easy place to have a good race when you’re behind,” Raikkonen said. “It will be a hard race, and we’ll try to make the best out of it.”

Raikkonen won at the Hungaroring in 2005, and has been runner-up five times, including the last two years.