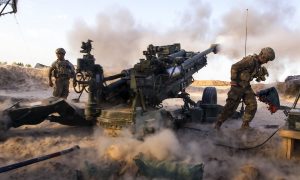 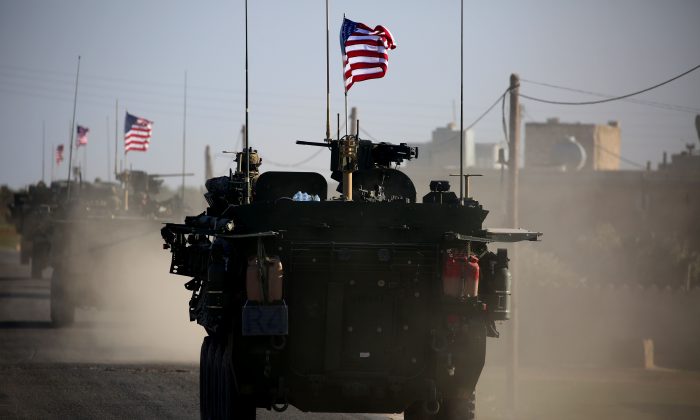 A convoy of US forces armoured vehicles drives near the village of Yalanli, on the western outskirts of the northern Syrian city of Manbij, on March 5, 2017. (Delil Souleiman/AFP/Getty Images)
International

BAGHOUZ, Syria—ISIS terrorists along with women and children surrendered in the hundreds to U.S.-backed forces in eastern Syria on March 14 as the jihadists lost ground in their last shred of territory.

Many of the men were limping as they crossed out of the Baghouz enclave along a dirt path over a rocky hill, with weeping children and fully veiled women, dragging suitcases and backpacks behind them.

Some men trudged along on crutches with bandages wrapped around their legs. Women hoisted children onto their shoulders to get them up the hill, leaving strollers and blankets behind in the dust.

Adnan Afrin, a commander in the Syrian Democratic Forces (SDF), said hundreds of people were emerging, adding to the many thousands who have streamed out of Baghouz in recent weeks.

“They are coming out this way in case there are snipers or someone wants to attack.”

SDF spokesman Mustafa Bali said some 1,300 jihadists and their families came out on March 14. SDF fighters said they included foreigners.

Number of Daesh members surrendered to us since yesterday evening has risen to 3000. 3 Yazidi women and 4 children were rescued, too.

The militants surrendered during a pause in the U.S.-backed assault to seize the final patch of populated ISIS territory—a self-declared “caliphate” that once spanned a third of Iraq and Syria.

In the morning, explosions rang out at the front line as artillery fire pounded Baghouz and warplanes buzzed overhead.

The SDF, which the Kurdish YPG militia spearheads, said the jihadists had deployed more than 20 suicide bombers in counter-attacks in the last two days.

It said at least 112 militants had been killed since it resumed the offensive at the weekend.

No ISIS commanders are believed to be in Baghouz village, a U.S. defense official has said. U.S. government experts strongly believe its leader Abu Bakr al-Baghdadi is alive and possibly hiding in Iraq.

The jihadists are still assessed to be a potent security threat with a foothold in remote areas and widely expected to escalate a wave of guerrilla attacks.

ISIS redrew the map of the Middle East in 2014 when it declared its ultra-radical Sunni Islamist “caliphate” and established a rule known for mass killings, sexual enslavement and meting out punishments such as crucifixion.

The militants suffered their major military defeats in 2017, when they lost the cities of Mosul in Iraq and Raqqa in Syria. They were then forced down the Euphrates River to their last bastion at Baghouz, a cluster of hamlets on the eastern bank.

In part of the ISIS encampment which the SDF seized a few days ago, collapsed tents and fallen palm trees lay among a scattering of rubble and twisted metal.

The SDF assault had been postponed repeatedly over the last few weeks to evacuate people from the enclave, many of them wives and children of fighters.

Overall, tens of thousands have fled ISIS’s shrinking territory in recent months. The SDF has mostly transferred to a camp at al-Hol in the northeast.

The United Nations says the camp now holds around 67,000 people, 90 percent of them women and children—well beyond its capacity. Camp workers say they do not have enough tents, food or medicine. They have warned of diseases spreading.

Aid agencies say scores of people, mostly children, have died en route to the camp or shortly after arriving.