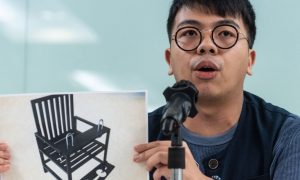 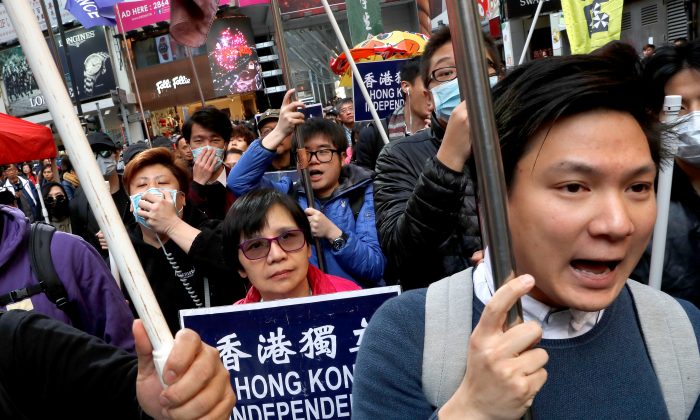 HONG KONG—More than 200 protesters gathered at a Hong Kong university on March 7 to condemn the expulsion of a student defending free speech, in what is seen as another incremental sign of eroding freedoms in the Chinese-ruled city.

The former British colony reverted to Chinese rule in 1997 with the guarantee of a high degree of autonomy and civil liberties, including academic freedoms and free speech not permitted in mainland China.

But since the 2014 pro-democracy “Umbrella Revolution” street occupations that blocked major roads, there has been a gradual tightening of civil liberties and individual rights, especially against a younger generation of student activists who spearheaded the protests.

The latest row involves a controversy over a so-called “democracy wall” at the Polytechnic University—a public notice board, common at many Hong Kong universities, designated as a free space for expression, political or otherwise.

Last September, the university decided to cover part of the wall after slogans advocating independence for Hong Kong were posted. That prompted a group of students to storm the university administration offices to demand that the democracy wall be free from censorship, sparking a skirmish between the students and several guards.

After months of deliberation, four students were punished March 1, including the expulsion of a post-graduate nursing student, Gerald Ho, who has openly advocated independence for Hong Kong, a red line for Communist Party rulers in Beijing. A former student union leader, Lam Wing-hang, was suspended from his studies for a year, while two others were ordered to do community service.

The protesters demanded the punishments be rescinded, echoing a joint statement put out by a coalition of student union bodies at more than 10 tertiary institutions, demanding free speech be respected on campus.

“The absence of clear sentencing guidelines renders the verdicts highly unjust and unacceptable. The intention of the university authorities to create a chilling effect for eradicating all ‘sensitive views’ is crystal clear in this case,” the statement read.

“I am not afraid of white terror,” he told the crowd, referring to the university’s heavy-handedness and lack of a legal basis for the punishments.

China considers Hong Kong its inalienable territory and considers any advocacy of independence to be taboo and a violation of Hong Kong’s mini-constitution, or Basic Law.

In 2017, the heads of 10 universities in Hong Kong released a joint statement saying that they didn’t support Hong Kong independence, as it contravenes the Basic Law.

While the university offered no immediate response to a Reuters request for comment,  the institution’s interim president, Philip Chan, said in an earlier mass email to students that violent acts on campus won’t be tolerated.

Hong Kong authorities cited a law that allows the government to ban groups “in the interests of national security, public order, or the protection of the rights and freedoms of others.”

Hong Kong is governed under a “one country, two systems” principle that allows the global financial hub a high degree of autonomy and freedoms that aren’t enjoyed in China, including an independent legal system and freedoms of speech and assembly. But since the handover to Chinese sovereignty, the city has seen encroaching influence from Beijing.

A few months later, the government barred a pro-democracy lawmaker from running in a local election because of “implicitly” supporting Hong Kong’s independence from China.

By Jessie Pang. The Epoch Times contributed to this report.