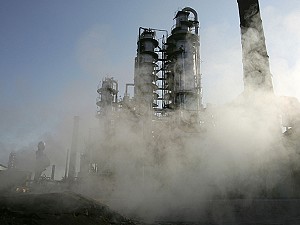 BEIJING—About 200 people staged a protest in a city in southwest China against construction of a major petrochemical complex, saying it would lead to serious air and water pollution, local media reported on Monday.

Protesters in Chengdu, capital of Sichuan province, marched peacefully for about two hours on Sunday to demonstrate against plans for an ethylene plant and an oil refinery on the city's northern outskirts, the Beijing News said.

“Because of fears that these two projects, when finished, could seriously pollute Chengdu's air and water resources, the people 'took a stroll' to express their opposition,” the paper quoted an unnamed resident as saying.

Ethylene is a commonly used industrial compound in packaging and insulation. It can be toxic in large doses and lead to nausea, loss of memory and even death.

Construction had begun on one of the projects, the paper said, which would be located about 35 km (22 miles) north of Chengdu's city centre.

The ethylene plant was slated to produce 800,000 tonnes of ethylene a year. The refinery, which would refine 10 million tonnes of crude a year, had been approved last month by the National Development and Reform Commission, China's top planning agency, the paper said.

The projects were expected to provide more than than 20,000 jobs, the paper said, citing an unnamed expert. The protesters were orderly and did not shout slogans or carry banners, the paper said.

Protests against pollution and official abuse of power are common across China's vast countryside, but dissent is rarely voiced openly in more affluent cities.

But along with rising property ownership, increasingly tenacious urban residents have become less tolerant of breakneck development, and have successfully organised to halt a number of controversial government-backed projects in recent years.

Authorities in commercial capital Shanghai have shelved an extension to the city's high-speed “maglev” train after hundreds of people marched through city streets in January, saying they feared the train could emit radiation and bring down the value of their homes.

Last year, thousands of street protesters in Xiamen, a resort town on China's southeast coast, lead authorities to abandon plans for a paraxylene plant on the outskirts of the city.