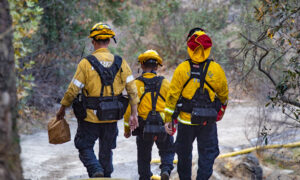 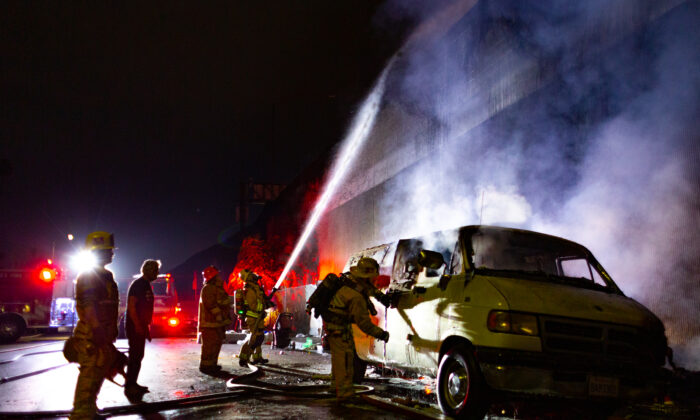 Hundreds of unvaccinated firefighters in Los Angeles say they plan to show up for work on Oct. 20, despite a city mandate stating they must be fully vaccinated for COVID-19 by that date or face losing their jobs.

“The city is stating that as of the 20th, we’re going to be terminated. We’re not supposed to show up to work if we’re not vaccinated or if we don’t have an exemption file at that time,” Los Angeles Fire Department (LAFD) firefighter-paramedic and Firefighters4Freedom spokesperson John Knox told The Epoch Times.

Attorney Kevin McBride recently filed a notice of intent to sue on behalf of the group of 871 firefighters, who are seeking $2.5 million each in damages.

“The city’s goal is to have a vaccinated workforce. As such, employees will not have the option to ‘opt out’ of getting vaccinated and become subject to weekly testing,” the city ordinance (pdf) reads.

In a recent public order (pdf), Los Angeles Mayor Eric Garcetti wrote, “The best way to reduce the current level of community transmission and to prevent future surges is for everyone who is eligible, including those who have recovered from a COVID-19 infection, to get fully vaccinated as soon as possible.”

Unlike other city and county employees, teachers, nurses and other health care workers who have been countering the vaccine mandate through applying for medical or religious exemptions, the group Firefighters4Freedom has taken a different stance. They say that as American citizens, they have the right to choose the course of their lives free from government overreach.

On the Firefighters4Freedom website, the group states: “As Stakeholders for the LAFD, (Los Angeles City Fire Department), our mission is to maintain human rights, constitutional rights, civil rights, and civil liberties as sovereign natural free human beings, and American citizens. We believe in the right to work, freewill, personal choice, medical freedoms, and consent without coercion, retaliation, threats, disciplinary action, or termination. This is not a vaccine versus non-vaccine issue, this is not a left versus right political issue. This is a human rights issue.”

More than 450 LAFD employees have filed for exemptions, but members of Firefighters4Freedom say they believe filing for exemption gives the government too much power and is an admission by employees that the city has ultimate control of the outcome. They say the city can claim the exemptions are a hardship and that it’s unable to make accommodations, thereby providing an excuse to let the employee go if they choose not to be vaccinated.

In addition, the current mandate is a direct order for firefighters and police officers, and those who don’t comply could be disciplined or fired based on insubordination.

“Even though they basically said that if the exemption process is a burden to the city, they have the ability to send us home with no pay and or terminate us, we still have 450 members that have applied for exemptions,” Knox said. “The city has to have a place to put us in order to do that, but then you also have 27 other (city) departments with people filing for exemptions as well. LAPD has 2,600 exemptions that have been filed. You tell me where they’re going to put all those people? There is no way there are 2,600 open jobs in the city.”

The California Fair Employment & Housing Act (FEHA) is the primary state law addressing protections for employees from discrimination, retaliation, and harassment. The employment provisions of the FEHA anti-discrimination provisions apply to all employers with five or more full-time or part-time employees.

Under the law, in mandating vaccinations, the city must provide reasonable accommodation based on disability or a sincerely held religious belief or practice; cannot discriminate against or harass employees or job applicants on the basis of their disability or religion; and cannot retaliate against anyone for engaging in a protected activity, such as requesting a reasonable accommodation.

“Our point is that if I say I’m going to file an exemption, then I’m agreeing that you have the right to tell me what to do with my body,” Knox explained. “Let’s say they grant it, they allow me to work in the field this one time, then all of the sudden, the ‘zebra variant’ comes along, and ‘it’s so much deadlier’ and now ‘we have to pull your exemption status.’ Now I don’t have a leg to stand on because I’ve given them control over me in the first place.”

“I took an oath to the state constitution and the federal constitution to protect and serve when I was hired 21 years ago,” Knox said. “I want my job. I want my career. So, on the 20th, I’m going to show up for work, just like I’m supposed to, and they’re going to have to take me out of there, along with everyone else, because we’re not agreeing to this. We have a right to work in this state, we have a memorandum of understanding (MOU), we have a contract, and they can’t come in in the middle of that contract and change the rules and the laws without meet and confer, or creating a new MOU and letters of agreement. It’s a clear violation of labor laws.”

Knox says that the mounting stress and anxiety of not knowing what the future holds is taking a toll on the department, and that because union representatives are in a “meet and confer” status, neither the city nor their union are giving any information as to what lies ahead.

“We’re literally in limbo, they [are] keep[ing] us in the dark,” Knox said. “One of the reasons that the lawsuit was filed for monetary value is the amount of stress and resulting low morale that is being placed on our department. We’re already understaffed, we cannot hire to fill all the spots, so they close companies down, they move bodies around to try and create enough coverage in the city.”

Knox also told The Epoch Times that the issue is breaking firefighter families apart at a time when they need to hold together as their communities recover from the devastating effects of the COVID-19 shutdowns. “The amount of stress we have right now in the department is no joke, we have members that are ready to take their own life. It’s that serious.”

Knox said Firefighters4Freedom has been reaching out to help those who are feeling the strain.

“We are letting members know that we are here for them, that we can get them whatever help is necessary,” Knox said. “Some say they feel like they are on an island with nowhere to turn. Their job is already so stressful, then add to that COVID-related, and life and home issues, and then not knowing if they are going to have a job after the 20th, it’s just too much for some of them.”

Knox says the city’s infrastructure has 106 fire stations with approximately 3,400 employees, including the 1,100 to 1,200 personnel per shift on any given day. Of those, 1,600 are unvaccinated and another 600 have declined to state.

“The Constitution states ‘We the People’ in big letters, and allows the government to govern us, not rule us. We elect them to govern, to create things that allow us to have our freedoms, and here they’ve changed that,” Knox said. “If we allow this, there will be no more legislative process, because they’ll know that no one’s stood up against it, they’ll see it is way too easy to become our rulers.”