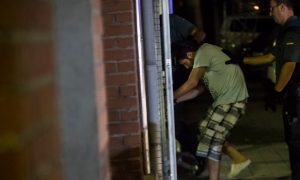 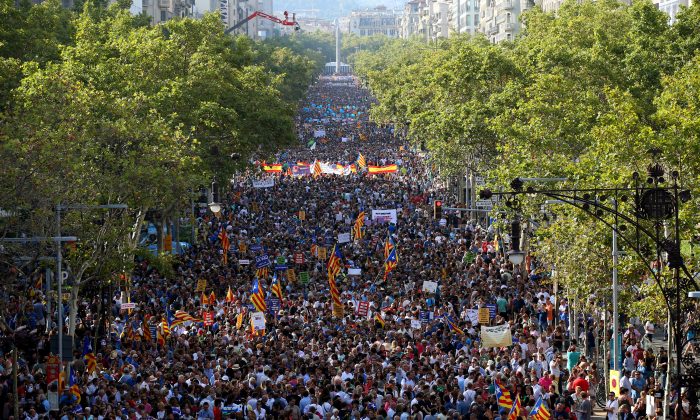 People hold placards and flags as they take part in a march of unity after the attacks last week, in Barcelona, Spain on Aug. 26, 2017. (Reuters/Albert Gea)
Europe

BARCELONA—Hundreds of thousands marched in Barcelona in a show of unity on Saturday evening amid chants of ‘I am not afraid’ after two Islamist terrorist attacks in the Spanish region of Catalonia last week left 15 dead.

The march was led by shopkeepers and residents of the city’s well-known Las Ramblas boulevard, where a van ploughed into pedestrians on Aug. 17, killing 13 and injuring over a hundred. The crowd applauded representatives of the police, fire services and medical professions who also led the march.

“We are here to say we’re not afraid, we are united and we want peace,” said 59-year-old pensioner Victoria Padilla as she marched. Slogans carried by marchers read “The best answer: peace” and “No to Islamophobia”.

Police estimated the march at half a million people.

Members of Spain’s Islamic community marched alongside the King and Prime Minister Rajoy, including women wearing hijabs. Speakers gave readings next to a floral display with the words ‘Barcelona’ and ‘I am not afraid’ in different languages including Arabic.

“We have to know how to speak to each other and understand others. Everyone has to learn how to be more human,” said demonstrator Juan Ripoll, 63.

In the run up to the protest, Barcelona mayor Ada Colau called for a massive turnout after what she called a “tough, painful week” which saw two deadly Islamist terrorist attacks in many days and an extensive manhunt for those responsible.

In addition to the 13 killed by the van, two others were killed during the driver’s getaway and in a separate car and knife attack in the Catalan coastal resort of Cambrils.

Of the 12 suspects linked to the attacks, six were shot dead by police and two died in an explosion before the van rampage. Two are in custody on charges of murder and membership of a terrorist organization, and two have been freed on certain conditions.