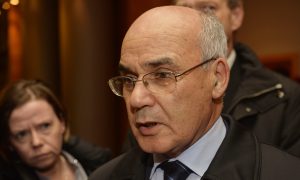 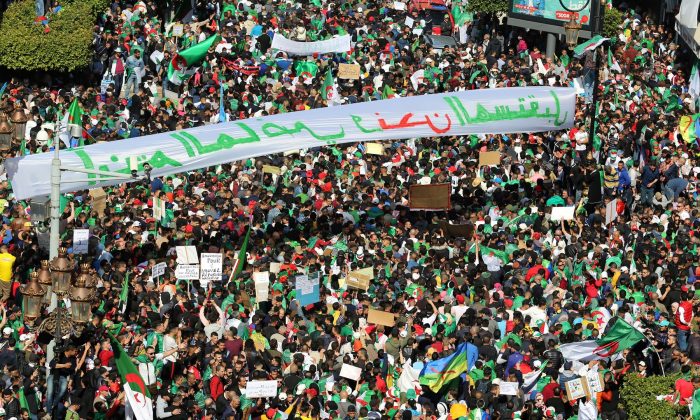 People carry national flags and banners during a protest to demand the resignation of President Abdelaziz Bouteflika, in Algiers, Algeria on March 29, 2019. (Ramzi Boudina/Reuters)
Africa

ALGIERS—Hundreds of thousands of people took to the streets of Algiers on March 29 to demand the resignation of President Abdelaziz Bouteflika, in the biggest demonstration since unrest erupted six weeks ago.

In at least one location, a Reuters correspondent saw police opening fire with tear gas and rubber bullets, and chasing and beating demonstrators after youths hurled stones at them.

The turnout came days after the military called for the aging leader’s removal to end a growing political crisis. State television showed protests in several other cities.

The protests have been largely peaceful but have put pressure on the army to act. Some witnesses estimated the number of people on the streets on Friday at around one million, but authorities said the number was lower.

According to #popular sources, #Algiers has lived today the biggest #protest in numbers as #Algerians from the neighboring cities invaded the capital.

Popular, national and #non_violent , this is how it works !

While many people resent the power held by Bouteflika and his shrinking inner circle, they also reject the idea of army intervention in civilian political life.

“Street pressure will continue until the system goes,” said student Mohamed Djemai, 25, as hundreds of riot police kept an eye on the protests and helicopters flew overhead.

“We have only one word to say today: all the gang must go immediately, game over,” said Ali, a merchant, as other protesters shouted, “The people want the fall of the regime!”—the rallying cry of the Arab Spring uprisings in 2011.

Families stood on balconies above the streets cheering the marchers, who ranged from journalists, doctors, and teachers to homeless people.

The regime must go ! #Bouteflika and his corrupt mafia must go !#AlgeriaWakesUp#Algerie_manifestation#حراك_29_مارس#algeriaprotests pic.twitter.com/nmlWIDV1g9

The crowds shared out dates and water and bought ice cream from street vendors.

The army chief of staff, Lieutenant General Ahmed Gaed Salah, on Tuesday asked the Constitutional Council to rule whether the ailing 82-year-old president was fit for office.

The move further isolated Bouteflika, who has failed to placate the protesters by reversing a decision to seek a fifth term.

Bouteflika established himself in the early 2000s by ending a civil war that had claimed 200,000 lives. But he has rarely been seen in public since suffering a stroke in 2013, and now faces the biggest crisis of his 20 years in power.

Algeria has long been dominated by veterans of the 1954-1962 independence war against France, but many now see these as too old and out of touch.

The protesters want to replace the establishment with a new generation capable of modernizing the oil-dependent state and giving hope to a young population impatient for a better life.

“You are the Titanic. You will sink!” protesters shouted.

The military, for its part, has stayed in its barracks throughout the unrest.

“There is a risk in involving soldiers in the protests because the soldiers are young. They could end up not listening to orders to confront protesters,” said a former military intelligence officer.

But Salah’s call for Bouteflika to step down was a clear reminder to Algerians that the army intends to retain its vast influence in national affairs.

Saadia Belaid, a woman crying as she wore the flag of Algeria, said: “I’m crying because they kidnapped Algeria, and the army’s proposal is a real travesty.”

One banner read: “We want Salah to go.”

However, Salah’s call received backing from the ruling FLN party and the main trade union, signaling that Bouteflika’s time was all but up.

In the latest blow, one of Bouteflika’s few remaining influential supporters, leading businessman Ali Haddad, resigned as head of the influential FCE business forum, according to a letter seen by Reuters.

Haddad, who was awarded large public works projects by the government and has investments in the media, has helped to fund Bouteflika’s election campaigns over the years.

Under the constitution, the chairman of parliament’s upper house, Abdelkader Bensalah, would serve as caretaker president for at least 45 days if Bouteflika stepped down. There is, however, no obvious long-term successor.