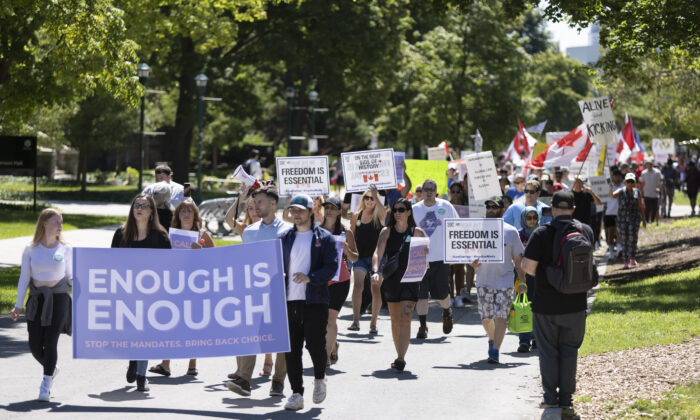 A group of Western University students hold a protest against the school's COVID-19 vaccine mandate on Aug. 27, 2022. The London, Ont., university announced on Aug. 22 that anyone on campus in the fall must have at least three COVID-19 shots and wear masks in classrooms. (The Canadian Press/Nicole Osborne)
Canada

Hundreds of students marched across the campus of Western University on Aug. 27 in protest against its COVID-19 vaccine policy that makes it the only university in Canada to mandate three shots for all staff and students.

Students leading the march were seen carrying a banner reading “Enough Is Enough” while chanting those words. The demonstrators carried Canadian flags as well as posters with words such as “Medical Coercion” and “I Call My Own Shots.”

All individuals on campus—including students, employees, and visitors—must provide proof of vaccination or have an exemption granted by the university. They must also comply with “any testing program and other requirements established by the university from time to time.”

The London, Ontario, university added that, “as public health advice continues to evolve,” it “may require individuals attending on campus to provide proof that they have received one or more additional boosters.”

Protest organizer Kendra Hancock said she hoped the demonstration would lead to public negotiations and further student consultation over the university’s rules, which also include mandatory masking in classrooms.

“I think when they consult students they’ll find people want choice back and people want to remove all the mandates,” Hancock said.

Several speakers spoke out against the vaccination policy during the rally on Aug. 27, including Dr. Julie Ponesse, an ethics professor who was fired from Western University’s affiliated Huron University College last September for refusing to comply with its COVID-19 vaccine mandate.

Ponesse said “the truth is coming out,” pointing to Western’s motto, “Veritas et Utilitas,” which means “truth and usefulness.”

“As St. Augustine said, you don’t have to defend the truth. You can just unleash it and it will defend itself,” she told the crowd.

Corrina Courtney, a fifth-year undergraduate business student at Western, said she opposed the university’s mandate despite having had a booster shot herself. The decision to get vaccinated “should just be a choice,”she said.

“I think that should be something that’s universal and not under anybody’s judgment. Western shouldn’t have the authority to make that decision for people,” she said.

James Donalds told reporters that he was ready to join his fellow first-year nursing students on campus next month but that he would sit out this academic year if the vaccine policy stands.

He said he felt “coerced” to get two doses earlier in the pandemic when proof of vaccination rules were in place. Now, he said, after “waking up to the situation,” he does not want a third shot.

Donalds also criticized what he called a lack of transparency around the university’s decision, while questioning the timing of the announcement, which came after some students had already paid the first tuition instalment.

Most Ontario universities have not imposed either vaccine or mask mandates for the fall semester, and the province has lifted proof of vaccination requirements in public spaces.

Western is the only university in Canada to mandate booster shots for all staff and students on campus, though some other institutions, including the University of Toronto and Trent University, have required those living in residence to have three and two doses, respectively.

In response to the students’ protest, Western University said in a statement on Aug. 27 that “we respect students’ rights to peacefully protest on campus, and we are supporting them to do so safely.”

The university also noted that it is aware of the involvement of “groups not associated with our campus community,” which it said “are looking to use this peaceful protest as a platform to express their own grievances,” though it didn’t provide any further information on those groups.

“We are concerned that this event will be used for reasons other than what our students have planned, creating a risk of it becoming disruptive and potentially dangerous,” the statement reads.

“We are not, however, in favour of actions that risk the safety of peaceful protestors or others who happen to be on campus or in our neighbouring communities,” it added.