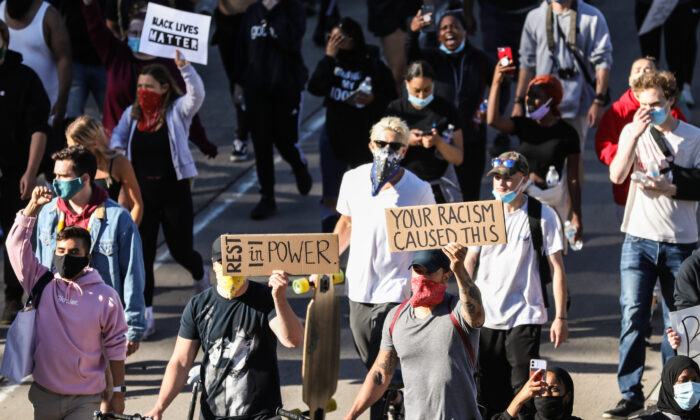 Protesters march along the freeway that exits St. Paul on their way to U.S. Bank Stadium in Minneapolis via the Saint Anthony Falls bridge on the fourth day of protests and violence following the death of George Floyd, in Minneapolis, Minn., on May 29, 2020. (Charlotte Cuthbertson/The Epoch Times)
US News

Hundreds of Protesters Detained After Blocking Traffic on Bridge in Dallas

Hundreds of protesters were detained after blocking traffic on the Margaret Hunt Hill Bridge in Dallas on June 1 amid the ongoing protests in response to the death of unarmed African American man George Floyd in Minneapolis last week.

The march began with roughly 300 people at the Frank Crowley Courts Building, which falls outside parts of the city for which a 7 p.m. curfew was issued by Dallas Police Chief U. Renee Hall on Sunday.

The group marched from the courthouse and headed toward the Margaret Hunt Hill Bridge where they met with a line of police preventing them from moving forward, NBC DFW reported.

A second line of police then formed behind the group, essentially trapping the protesters in the center of the bridge, and began shooting rubber bullets at a small group of people near the entrance of the bridge who had allegedly started yelling at officers.

Roughly 200 protesters were detained by police and taken to the Frank Crowley Courthouse. Dallas County Judge Clay Jenkins said on Monday they have since been released.

The judge said he had also spoken to the protesters via phone and they had “agreed they’d peacefully protest for a while tonight.” He also reminded Dallas citizens of the importance of maintaining social distancing and wearing a mask amid the current CCP virus pandemic.

Police Chief Hall came out to address the protesters outside DPD and said officers would enforce the city’s curfew.

“We are heartbroken about Mr. Floyd and we don’t like it either. But here’s the thing we get to do. We get to acknowledge that there are some cultural things in law enforcement,” she said.

Protests continue to rage on in dozens of cities around the nation, including Minneapolis, Washington, New York, Atlanta, Detroit, and Louisville.

Floyd, 46, was arrested by police outside a south Minneapolis grocery store on Memorial Day for alleged fraud. A citizen’s cellphone video showed an officer—identified as 44-year-old Derek Chauvin—kneeling on Floyd’s neck for almost 9 minutes as he struggled to breathe.

He eventually became unresponsive, and the father of two was pronounced dead May 25. Chauvin was arrested and has since been charged with third-degree murder and second-degree manslaughter. Three other officers, Thomas Lane, Tou Thao, and J. Alexander Kueng, were fired from the Minneapolis Police Department.

On Monday, President Donald Trump vowed to deploy the U.S. military in order to quell the protests if state officials could not contain them, noting that the “highest duty as president is to defend our great country and the American people.”

“Today, I have strongly recommended to every governor to deploy the National Guard in sufficient numbers that we dominate the streets. Mayors and governors must establish an overwhelming law enforcement presence until the violence has been quelled,” he said at a press conference from the White House.

“If a city or a state refuses to take the actions that are necessary to defend the life and property of their residents, then I will deploy the United States military and quickly solve the problem for them,” he added.