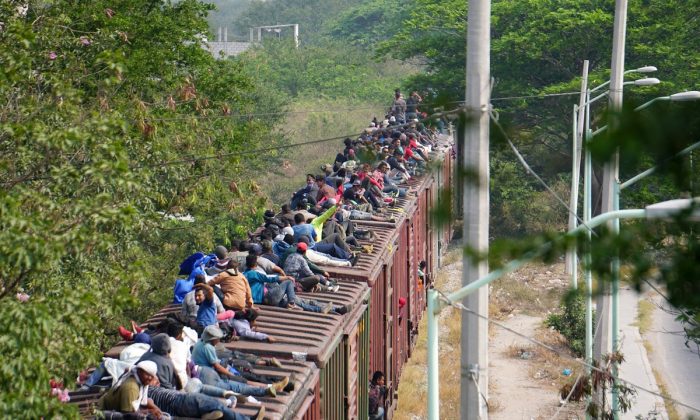 Central American migrants, moving in a caravan through Juchitan, Oaxaca are pictured atop a train known as "The Beast" while continuing their journey toward the United States, in Mexico on April 26, 2019. (Jose Cortes/Reuters)
US News

Hundreds of Migrants in Southern Mexico Board ‘The Beast’ Heading North

IXTEPEC, Mexico—Hundreds of migrants hoping to reach the United States boarded a freight train in southern Mexico late on Thursday, frustrated by efforts to slow their progress by the Mexican government, which is under pressure from U.S. President Donald Trump.

The risky move to board the train, known as “La Bestia” (The Beast), followed a mass breakout of migrants from a holding center in the southern border city of Tapachula on Thursday night. The government estimated some 1,300 people escaped but said a majority later returned to the center.

Men, women and children from various countries boarded the slow train as it pulled out of the town of Arriaga in the southern state of Chiapas, Mexican media reported. Migration authorities said at least 395 people had boarded the train.

The large group descended from the train on Friday after it reached the town of Ixtepec to the northwest of Arriaga.

“We had to keep moving forwards,” said Michael Hernandez, a Honduran, after disembarking. “They won’t let us walk, so we climbed on the train. It’s our only option.”

Erick Morazan, 28, a Honduran migrant in Zapata, a few towns north of Ixtepec, said he knew several people on the train, adding that he had wanted to jump aboard himself.

“I know it’s very dangerous, but this is the life of a migrant,” he told Reuters by telephone.

Trump has threatened to close the U.S.-Mexico border if the administration of President Andres Manuel Lopez Obrador does not put a stop to illegal immigrants reaching the U.S. frontier.

The breakout from the Tapachula holding center was one of the biggest in recent years, and came after Mexico stepped up efforts to round up and send home migrants.

Mexico’s migration institute said on Friday that of the roughly 645 people who had fled, 35 people had since returned. It added in a statement that the group consisted largely of Cubans, who have been coming to Mexico in growing numbers. The Tapachula facility is holding 980 Cubans out of a total of 1,745 people.

Migrant advocacy groups have said the space is designed for about half of that number.

Cubans, and migrants from other regions outside Central America, have added to the pressure on Mexico’s already overwhelmed shelters and detention centers. Costa Rica’s migration office said on Friday that, for the past week, more than 100 Cubans and Africans have crossed into Costa Rica on average every day from Panama, headed north.

Video footage of the escape from the Siglo XXI facility posted on social media showed people sprinting from the gates of the holding center, the biggest of its kind in Mexico.

Families of migrants held at the center say conditions inside are difficult. Detainees, they say, sleep on the hard floor, eat poorly and lack medical attention.

Mexico’s National Migration Institute did not reply to requests for comment on conditions at the facility.