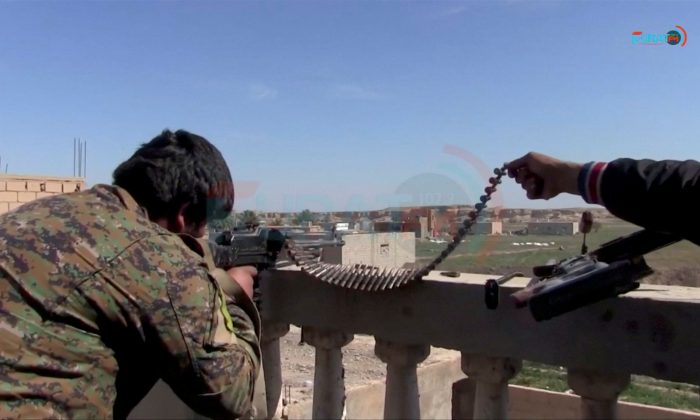 FILE PHOTO: A soldier said to be from US.-backed Syrian Democratic Forces is seen firing a rifle from a rooftop towards IS targets in Baghouz, Syria, in this screen grab taken from video said to be shot March 4, 2019, and uploaded to social media website on March 5, 2019. Social Media Website/ via REUTERS
US News

NEAR BAGHOUZ, Syria—Hundreds of ISIS terrorist fighters surrendered on March 6 and hundreds more of their comrades were caught trying to escape the jihadist group’s last, tiny scrap of land in eastern Syria, said a commander in the militia besieging it.

ISIS terrorists holed up in the enclave at Baghouz near the Iraqi border have been giving up in large numbers this week after a ferocious assault on their enclave on March 2&3, but many remain inside, said the commander.

The U.S.-backed Syrian Democratic Forces (SDF) has slowed its attack to allow thousands of civilians to leave Baghouz, continuing an exodus that began when it announced it was launching a final battle for the enclave last month.

Far more people were still in Baghouz than the SDF had expected, it said, and it wanted them all to leave before it either stormed the area or otherwise forced ISIS to surrender there.

“There are a large number of fighters who are inside and do not want to surrender,” said the senior SDF commander.

The fall of Baghouz would mark the end of the rule of ISIS self-proclaimed “caliphate” over populated territory, although some fighters are still hiding out in remote desert or have gone underground to wage a guerrilla insurgency.

A war monitor, the Syrian Observatory for Human Rights, said there were preparations in eastern Syria to announce the end of ISIS there. Colonel Sean Ryan, spokesman for the U.S.-led coalition backing the SDF, nevertheless said the international force had “learned not to put any timetables on the last battle”.

Syrian military air strikes against jihadist fighters further west, in the country’s central desert, were a reminder of the constant warnings by both Arab and Western officials that ISIS will continue to pose a serious security threat.

After its sudden advance across swathes of Syria and Iraq in 2014, the group held about a third of both countries, but its wholesale slaughter or sexual enslavement of minorities and its grotesque public killings roused global anger.

Separate offensives by different forces in both countries steadily drove it back, inflicting major defeats on it in 2017, and eventually forcing it back on Baghouz, a little cluster of hamlets and farmland on the Euphrates.

Some 400 ISIS terrorists were captured trying to escape Baghouz along with smugglers, the senior SDF commander said. Hundreds of others jihadists surrendered, though it was not yet clear how many, the commander added.

Those surrendering were among more than 2,000 people who left Baghouz on Wednesday in the latest evacuation, transported by trucks to a patch of desert where they are questioned, searched and given food and water.

A group of fully veiled women being evacuated from Baghouz on March 6 shouted “Allahu Akbar” (God is Greatest) as they gathered near a checkpoint where the SDF were searching them and one hit a journalist with a can of tuna.

The SDF said about 6,500 people had left the area over the previous two days, including hundreds of men. Most civilian evacuees are headed for the al-Hol displacement camp in northeast Syria.

The International Rescue Committee aid group said that of the 60,000 people in the camp, 50,000 had arrived since December, mostly from the shrinking ISIS enclave, including 4,000 on March 6. Of the 90 people who have died reaching the camp since December, two-thirds were babies or infants, it said.

Among those who came out on March 6 were 11 captive children from the Yazidi community. ISIS subjected the Yazidis to mass slaughter and enslavement in what the United Nations called a genocide, after overrunning the community’s heartland of Sinjar in Iraq in 2014.

Four Shi’ite Muslim children abducted from the Iraqi city of Tel Afar four years ago were also freed and the SDF would try to reunite them with their parents said Mustafa Bali, a spokesman for the militia.

Live television footage broadcast on al-Hadath television showed an area of desert where evacuees from Baghouz had gathered, with scores of children and black-veiled women sitting on the ground or hauling luggage as they trudged along.