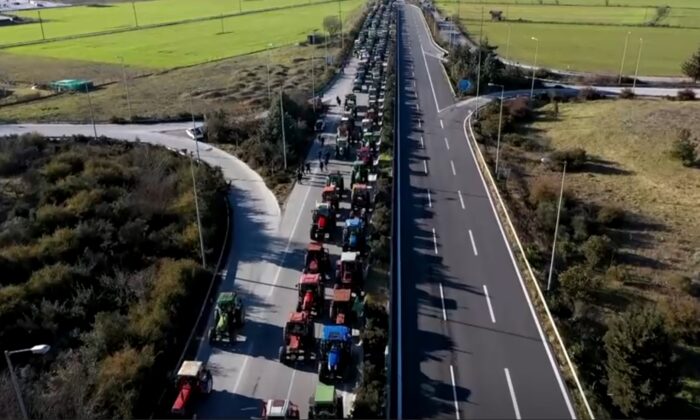 Hundreds of tractors parked in rows on part of national highway, near Larissa, Greece, on Feb. 4, 2022. (Reuters/Screenshot via The Epoch Times)
Europe

Greece has spent about 1.7 billion euros ($1.95 billion) in subisidising power bills for farmers, households, and businesses to help them with rising energy prices.

High energy costs have been the main driver of inflation, which acclerated to 5.1 percent in December, the highest in the country in 11 years.

Kostas Tzelas, head of the Karditsa agricultural association, said the rising prices for fuel and electricity had increased production costs by 50 percent.

“That is why we are out on the streets, the countryside will become deserted, villages will be deserted, people will not be able to cultivate and we will no longer be able to live in our villages,” he said at a rally on the national highway, outside Larissa, in the region of Thessaly, an agricultural heartland.

The farmers lined up hundreds of tractors on the highway in protest, and attempted to reach a main road junction linking the country, when they were stopped by riot police that had formed a cordon with police vans, forcing the closure of the section of highway.

“We are not the enemy, we are people, we are farmers fighting for our survival and our families, we are not bearing clubs or petrol bombs, we came with our tractors to wage our battle which is just. We ask the government to take political responsibility and provide political solutions and not to try and solve problems with riot police,” said president of the Larissa agricultural association Rizos Maroudas upon his tractor as he faced police.

Still coping with the debt incurred during the country’s financial crisis, and hit by heavy snowstorms in January that affected crops, farmers say rising energy costs have increased production costs, including supplies such as feed, fertilizers, veterinary drugs, and spare parts.

Thessaly produces some 14 percent of the country’s agricultural products, including grains, fruits, meats, and dairy.

Earlier on Friday, the government unveiled an additional 170 million euros in financial aid for the agriculture sector.

Agriculture Minister Spilios Livanos said in a televised statement that despite its tight finances, Greece had offered a 1 billion euros aid to farmers last year.

The package includes subsidies to cover 80 percent of the additional costs farmers face on their power bills from August up to December and half of this cost for January and February. A sales tax on fertilizers will be cut by 46 percent to 13 percent.

But the government action was dismissed as a “mockery” by the farmers, who demand further subsidies on electricity price hikes and on petrol costs.

“They don’t solve the basic problems that we have to maintain our farms and villages,” Tzelas said. “We ask for substantial measures that will give a real solution to our problems.”

Rising inflation and energy costs prompted the government to announce a cut in property tax rates by a further 13 percent on Wednesday. The measure follows a 2 percent increase in the minimum wage announced last month.