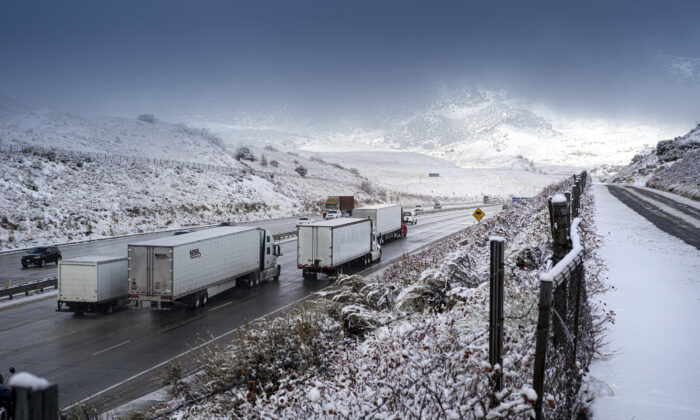 Traffic moves north along the Interstate 5 near the Tejon Pass as travelers try to get in and out of Southern Calif. for the Thanksgiving holiday, on Nov. 27, 2019. (David Crane/The Orange County Register via AP)
US News

Hundreds of drivers were left stranded in their vehicles on Interstate 5 near the Oregon-California border on Wednesday following a major blizzard.

The interstate was closed in both directions late on Tuesday because of the bomb cyclone, which blanketed some areas with nearly a foot of snow, and made it difficult for ploughs to clear the freeway.

Some drivers were forced to spend the night in their vehicles, while locals helped others by driving them to look for a place to sleep in Redding, where the snow had already begun to melt, Redding Police Cpl. Will Williams said.

Christina Williams, a resident of Portland, Oregon had been travelling with her 13-year-old son to the San Francisco area for Thanksgiving but said it took 17 hours to reach Redding, California, where they got a hotel room. That same journey in good weather conditions would typically take less than seven hours.

She told CBSN that she and her son had first encountered snow around Roseburg, Oregon, and driving conditions were so treacherous that she was afraid to try to exit the freeway because it was so slippery.

Meanwhile, Don Anderson, deputy director of the California Department of Transportation in Redding stressed the importance of using tire chains in the turbulent weather conditions.

“You must use your chains when directed to do so. Of all the trucks and vehicles that spun out nearly all did not put on their chains as they were required to do,” he said in a statement, adding that Caltrans are working with other agencies to communicate the seriousness of the storm to drivers.

The storm, caused by a rapid drop in air pressure, came ashore near Brookings, Oregon, late Tuesday afternoon and bought heavy snow and winds of up to 106 mph in some coastal areas.

Forecasters said it was one of the worst cyclone storms they had seen in the past 15 to 20 years, while storms such as this are very rare in the United States.

The blizzard has reportedly caused one death so far, while hundreds of flights have been cancelled. At its peak, Pacific Power said 15,000 customers were off the grid. However, that number has since dropped to 1,700, according to the company, according to local media.

Both North and Southbound lines have since reopened on Interstate 5 and tire chains are no longer required, Caltrans said on Twitter on Wednesday evening.

With reporting from The Associated Press