Hundreds of Counties Across America Have Declared Themselves ‘2nd Amendment Sanctuaries’ 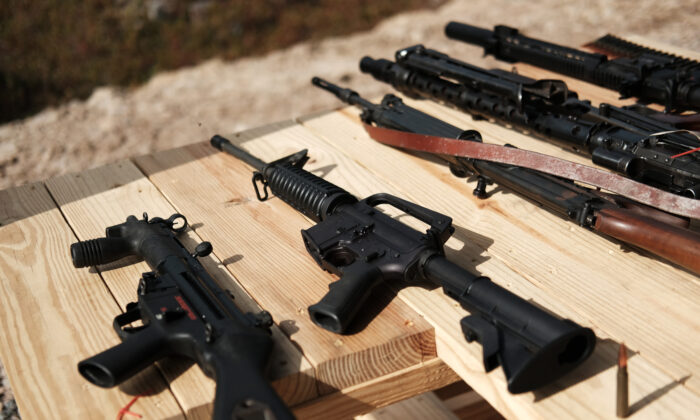 Rifles are displayed on a table at a shooting range during the “Rod of Iron Freedom Festival” on Oct. 12, 2019 in Greeley, Pennsylvania. (Spencer Platt/Getty Images)
By Bowen Xiao

NEW YORK—Hundreds of local counties, cities, and towns across America are declaring themselves “Second Amendment sanctuaries” or “constitutional counties” as part of an ever-expanding movement over the past few years that has surprised even those who enacted the sanctuary resolutions in the first place.

Local officials in these counties generally state that they won’t follow new gun laws they believe are unconstitutional. The movement has increasingly gained momentum since 2018 after one of the first sanctuaries was enacted in Effingham County, Illinois, in response to newly elected Gov. J.B. Pritzker, who had vowed to push new gun control legislation in the state.

They say enacting such proposals will “break the cycle” of gun violence.

In interviews with The Epoch Times, county officials who passed Second Amendment legislation said the new proposals infringe upon the rights of law-abiding citizens, and called the strength of the growing sanctuary movement a direct message to state Democrats, though some noted that the measures were largely symbolic. County sheriffs said much the same in interviews.

David Campbell, a member of the Effingham County Board, whose county was one of the first to pass Second Amendment legislation, in April 2018, said he was surprised to see the movement take off so fast.

“We were actually the first ones to pass it with the word ‘sanctuary,'” Campbell told The Epoch Times.

“It all started right there, and then it just blossomed. I think we are into 15 states now. I get calls constantly from other states and from other counties wanting a copy of our resolution and a map of how we did it.”

In Illinois, Campbell said it took less than two years for 70 of the 102 counties in the state to pass some form of sanctuary resolution.

“It’s sending a message to those legislators, letting them know that they better be paying attention,” he said. “They took an oath to support the Constitution of the United States. If they fail to do that, I think a lot of people are going to get voted out. You’re going to see a huge turnout in our next election cycle.”

Meanwhile, in Virginia, 87 out of 95 counties in the state have passed measures affirming their support for Second Amendment rights. Local leaders and an increasing number of sheriffs in the state similarly argue that gun reform measures that could be approved by their state legislature early this year are overreaching.

“They did it in almost two months,” Campbell said, referring to Virginia’s counties. “It’s just amazing.”

Dick Saslaw, the top Democrat in Virginia’s state Senate, has proposed similar gun control legislation to Illinois Democrats, with the addition of raising the minimum age to buy a rifle or shotgun from 18 to 21.

The Second Amendment to the U.S. Constitution was first passed by Congress on Sept. 25, 1789, and was ratified on Dec. 15, 1791. The text reads that “a well regulated Militia, being necessary to the security of a free State, the right of the people to keep and bear Arms, shall not be infringed.”

Despite the new sanctuary laws being largely symbolic, Campbell said that his county’s state attorney and sheriff have said they “will not prosecute or go after anybody if they are law-abiding citizens.”

In early December, Culpeper County’s Board of Supervisors in Virginia voted 7–0 to affirm itself as a “constitutional county,” prompting a standing ovation by residents present for the vote.

Like many other local officials, Sue Hansohn, a former member of the Culpeper County board who served from 2016 until November 2019, believes the focus should be on mental health problems and on enforcing existing gun laws, not creating more.

She said residents in Culpeper are concerned that the state will ban certain guns or restrict what they can use. She said taking away the firearms of law-abiding citizens will cause a black market to immediately open up.

“We are afraid, and residents feel like they would be left defenseless if they won’t be able to have their guns,” she told The Epoch Times.

Hansohn said she understands the fear generated from mass shootings but thinks there’s a deeper underlying issue that’s not being addressed.

“There’s a lot of mental health problems, and our state is not looking at that at all,” she said. “I don’t think passing all these bills is going to make a difference because if anybody wants a weapon they’re going to get one.”

A lot more can be done on this front, she said, suggesting that the state open more treatment centers and work with professionals such as psychologists and counselors to figure out how to help troubled people. She said officials need to really address why so many people are out there committing these crimes, noting that a lot of them are young adults.

President Donald Trump has previously talked about reforming mental health laws and enacting the death penalty for those who commit serious hate crimes and mass murders.

Hansohn said she knows many people who collect guns and would never harm anyone. She gave the example of a 92-year-old Culpeper resident she knows who still buys guns.

“I think people across the United States are all alike—they just fear their rights are being taken away,” she said about the gun sanctuary movement. “People don’t want to allow it to happen if they can stop it … they feel threatened by these bills.”

Campbell also said there needs to be more focus placed on addressing mental health, noting that the man who recently shot up a Dallas-area church in Texas most likely had “some kind of mental problem” to go into a place of worship and just start shooting people.

Jack Wilson, a church security member, shot the active shooter within seconds. Wilson was a reserve deputy who at one point had his own shooting range.

‘Our Forefathers Fought for That Right’

Meanwhile, a coalition of 21 state attorneys general is asking the Supreme Court to expand the scope of protection afforded to gun-ownership rights and to strike down a Maryland law that denies concealed carry permits unless applicants can convince local officials they have a “good and substantial reason” to be granted one by local authorities.

West Virginia Attorney General Patrick Morrisey, a Republican, and the other state officials filed the friend-of-the-court brief with the Supreme Court on Dec. 18.

The Supreme Court, in the 2008 case District of Columbia v. Heller, held that the “Second Amendment protects an individual right to possess a firearm unconnected with service in a militia, and to use that arm for traditionally lawful purposes, such as self-defense within the home.”

“I do support it, and I feel that our forefathers fought for that right,” Oakes said. “I encourage everybody to have some type of protection as far as a firearm.”

Oakes retired from his position on Dec. 31 after two decades of service. Wise County officially became a Second Amendment sanctuary on Dec. 12.

The end game, according to Campbell, is for legislators to take note that they should not prosecute law-abiding citizens, though he noted it remains unclear just how much impact these sanctuary counties will have overall.

“I really think in the long run, it’s going to take some time and take some education,” he said. “But I think if we stay vigilant and work together, we will see the majority of these legislators follow the Constitution.”

As most of Virginia’s counties have declared their support for the Second Amendment, one sheriff went further, saying he would “deputize citizens” as auxiliary deputies, if need be, to protect their constitutional right to bear firearms.

Culpeper County Sheriff Scott Jenkins told The Epoch Times that local officials are becoming “fully awake” on the goal of stopping what he described as “government overreach and restriction of our constitutional rights.”

“These [gun] restrictions will do nothing to stop a person that is hellbent on evil, and killing innocent people,” Jenkins said in a previous interview.