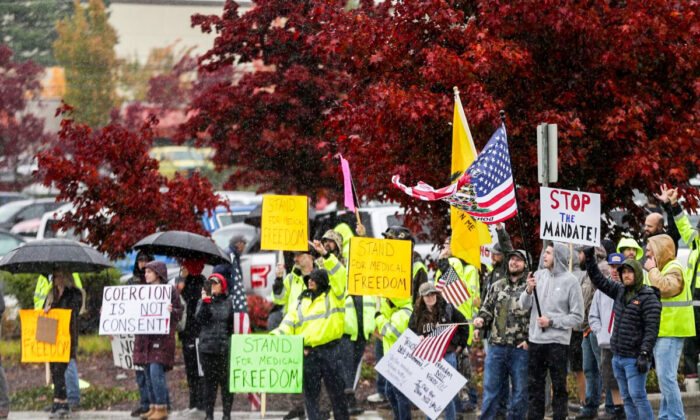 Boeing employees and others wave to passing traffic in the rain as they protest the company's COVID-19 vaccine mandate, outside the Boeing facility in Everett, Wash., on Oct. 15, 2021. (Lindsey Wasson/Reuters)
Vaccines & Safety

Hundreds of Boeing Co employees protested in Washington state on Friday after the company told workers they must be vaccinated against COVID-19.

Roughly 200 workers gathered in protest outside of the company’s Renton and Everett locations just days after the planemaker announced the new mandate.

On Oct. 12, the planemaker announced that employees must be vaccinated by Dec. 8 in line with the deadline set by President Joe Biden requiring federal employees as well as companies that are contractors and subcontractors of the government to receive the shots.

“To ensure compliance with President Biden’s executive order for federal contractors, Boeing is requiring its U.S.-based employees to either show proof of vaccination or have an approved reasonable accommodation, based on a disability or sincerely held religious belief, by Dec. 8,” a Boeing spokesperson said in a statement to The Epoch Times.

Protestors took to the streets on Friday brandishing signs reading, “coercion is not consent,” and “stop the mandate”.

Some protestors told The Seattle Times they were against being vaccinated due to religious reasons, while others said the mandate should not be forced on Boeing employees and were willing to walk away from their jobs.

“What the government’s doing, is making the corporations go out and do their dirty work. You’re mandated to lose your job, and that’s not right,” one protestor told the Times.

“These vaccine mandates are especially infuriating when they are being used to abuse our members who have been going to work throughout the pandemic as ‘essential workers’ while there was no vaccine, and yet these workers exposed themselves and their families every single day to COVID-19 so that our communities could continue to function,” Teamsters Local 174, which represents Boeing employees in Washington state, said in a statement obtained by Seattle news station KING-TV.

The statement continued: “Politicians and Employers treated our members as necessary but also expendable and didn’t care about them throughout the pandemic—but now want you to believe they do care. We do not accept that.”

The International Association of Machinists and Aerospace Workers union said in a letter to its members on Friday that Boeing has “communicated that it intends to release members who do not comply with the vaccine mandate.”

“This could mean members would be terminated without rights, without layoff status or any right to return. This is not acceptable and we will engage on this subject in effects bargaining,” the union said.

Boeing’s mandate will not apply immediately to its sites in Texas, Reuters reports.

Texas Gov. Greg Abbott on Oct.11 issued an executive order banning vaccine mandates by any entity in the state, including private employers.

Abbott has called Biden’s executive order “an assault on private businesses” and previously said that the state is working to halt “this power grab.”

“No entity in Texas can compel receipt of a COVID-19 vaccination by any individual, including an employee or consumer,” the governor said in his executive order.

Multiple airlines have mandated vaccines for employees, with United Airlines being the first U.S. carrier to do so, announcing the mandate in August. United Airlines confirmed on Sept. 29 that it was going to terminate 593 of its employees who have chosen not to comply with the company’s vaccine mandate.

American Airlines told workers in an email on Oct. 6 that they have to be fully vaccinated by Nov. 24 or face termination while Southwest Airlines (SWA) also announced it will require all of its 56,000 U.S. employees to be vaccinated against COVID-19.

Delta Air Lines is the only major U.S. carrier that has chosen not to mandate COVID-19 vaccines for all its employees, although it does require all new U.S. employees to be vaccinated, and that all unvaccinated Delta staff enrolled in its health care plan pay a $200 monthly surcharge.