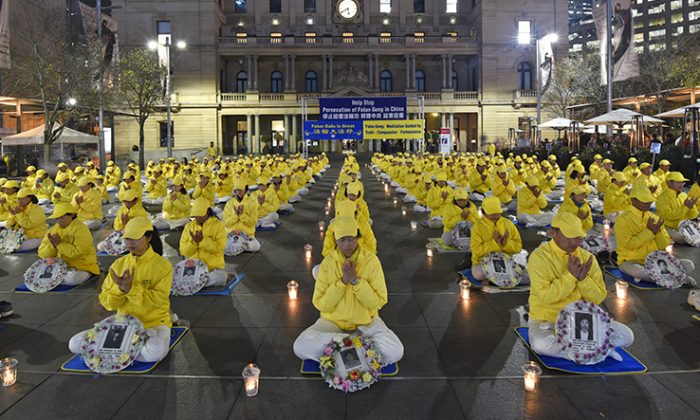 Falun Gong practitioners in Sydney, Australia, mark 20 years of brutal persecution of their faith by the communist Chinese regime on July 19, 2019. (The Epoch Times)
By Angela Bright

“It’s a beautiful day, isn’t it? We’re sitting in the sunlight, and we are free.

“There’s always some organizations, some countries, some structures that want to take our very freedom to sit in the sunlight away.

“Communist China is like that,” said Rev. Bill Crews, superintendent and CEO of the Exodus Foundation speaking a rally in front of Customs House in Sydney on July 19 calling for an end to the 20-year-long persecution of Falun Gong by the Chinese Communist Party (CCP).

July 20 this year marks 20 years of the Chinese communist regime’s persecution towards Falun Gong, also known as Falun Dafa—an ancient Chinese meditation practice that teaches truthfulness, compassion, and tolerance, according to faluninfo.net. Since the persecution started in 1999, waves of Falun Gong practitioners have been put into prisons, tortured, and forced to renounce their faith, with some even being killed for their organs, witnesses say.

Lucy Zhao, President of the Falun Dafa Association of Australia, described the persecution as “a battle between goodness and evil” that is “shocking to all the governments, all the people who have conscience.”

“Everyone has to take a side, with no middle ground,” Zhao said. “History will remember this moment. Everyone of us is choosing.

“Thanks for those who speak out. You are not only helping people in China, but are also helping defend justice.”

Zhao was joined by 12 guest speakers, all of who condemned the CCP’s brutal persecution of Falun Gong.

“By giving their people freedom of speech, freedom of assembly, giving groups like Falun Gong rights to exist without oppression, that can make China stronger as a nation, and also make the world stronger and more prosperous as well.

“(Falun Gong) should be encouraged in all society across the world, not just in China alone, but everywhere.”

Kelly added that it is important for Australia to work together with like-minded countries like the United States, Canada and nations in the European Union to pressure China.

He added that the United States under the Trump administration has been taking steps to put pressure on China with their trade policy.

“They are doing things that are actually harming the U.S. economy. But president Trump believes that it is in the best interest in the long term of his nation. And that’s what we’ve got to often get over—look[ing] at the very short-term things—and look at what is the best in the long term,” Kelly said.

Professor David Flint AM, an emeritus professor of law and former UTS Dean of Law, opened his address by quoting Edmund Burke’s dictum, “The only thing necessary for the triumph of evil is for good men to do nothing.”

The professor talked about how Deng Xiaoping’s policy to open up the Chinese economy under the CCP was believed by many in the West to be the start of the normalization of China.

However, Flint said that wish has yet to be realized today. “Power tends to corrupt, and absolute power corrupts absolutely. And you see that in China.”

He referred to the June 17 judgment by an independent people’s tribunal chaired by Sir Geoffrey Nice QC—the lead prosecutor of former Yugoslavian President Slobodan Milosevic at the International Criminal Tribunal—which concluded that forced organ harvesting has taken place in China, and that Falun Gong practitioners are the main source.

“Any entity, any individual dealing with the Chinese Communist Party state is in effect dealing with a criminal state,” Flint read from the China tribunal’s judgement.

He then drew from the experiences of John Newton, the writer of the famous Christian song Amazing Grace, who was a captain of slave ships before he finally came to the belief that slavery was not right, to encourage those dealing with the CCP to reassess their position.

Author, lawyer, and lecturer Sophie York said, “If murder is overlooked, it disturbs the peace; it disturbs the good order, and it leads to ruthlessness in the international community as well.”

“It is incumbent that all those who have good relations with China, such as Australia does, to not to turn a blind eye anymore, but to have the integrity and confidence, to point out that something monstrous is taking place here—something monstrous—it is inhumane, it needs to be stopped immediately. To not say or do anything when it’s really within our capacity to do something will make our nation complicit to some degree,” she said.

Falun Gong practitioner Tony Liu, who testified at the China Tribunal in London, also spoke at the gathering. Liu fled China in 2013. He shared about his experience in Beijing’s labor camp where he was requested by police to have his blood tested at least 3 times without any explanation. Refusal to do so would lead to severely beating.

“One day, a drug addict inmate was beating my back and waist. Another inmate ran in to pass on the guard’s order: ‘Don’t injure his organs!’” Liu said. He felt that the order was very strange, only to later suspect that his blood tests could have been related to organ harvesting.

Fatimah Abdulghafur, a leader from Australia’s Uyghur community, voiced her support for an end to the persecution.

Abdulghafur’s own families are missing in China, where the CCP has built concentration camps for Uyghurs in Xinjiang. She had lost contact with them for a while.

“I don’t know where they are. I don’t know if their organs were taken!” Abdulghafur cried in despair.

Another speaker Wendy Rogers, Professor of Clinical Ethics at Macquarie University and chair of the international advisory committee for the International Coalition to End Transplant Abuse in China, said, “It is time for the transplant community to speak up and stop all transplant-related interactions with China until there is evidence that organs are procured ethically and prisoners of conscience are released.”

Rogers gave evidence at the China Tribunal as an expert witness.

During the somber occasion, many of the speakers also voiced support for Hong Kong’s recent rallies against an extradition bill that could allow the CCP impinge on their freedoms and criticized the CCP’s atrocities against the majority-Muslim Uyghur ethnic group in Xinjiang. Some urged the Australian government to pass bills prohibiting transplant tourism to China and others called for Confucius Institutes in Australian universities to close, while asking the government to carefully consider the nation’s cooperation and trade with Communist China.