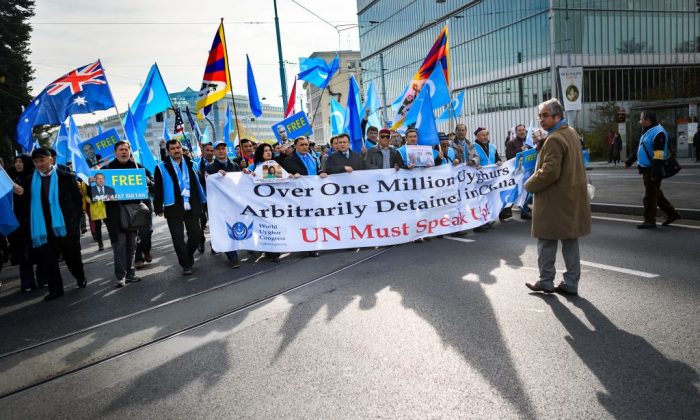 Chinese state media launched an attack on the 22 countries that co-signed a letter condemning Beijing’s mass detention of Uyghurs and other minorities in the Xinjiang Uyghur Autonomous Region.

China is reportedly holding at least one million Uyghurs and other Muslims in re-education camps, described as “concentration camps” by rights groups.

The Global Times, a Communist Party mouthpiece, launched a counterattack on July 11—a form of retaliation against the nations that spoke out against the Chinese regime’s inhumane treatment of Uyghurs and Muslim minority groups in Xinjiang.

“These 22 nations do not represent the world, they constitute but a handful,” the title of the Global Times editorial read.

The article, written in a very critical tone, claimed that many developing countries, including the majority of Muslim countries, understand and support China’s policy of maintaining stability in Xinjiang.

“All the 22 nations that signed the joint statement are developed countries, including the three tiny Baltic states that always echo the Western countries out of geopolitical motivations.” The article wrote, “The total population in these countries add up to only 500 million people. They constitute only a small fraction of the world’s population. The governments in these countries refuse to respect the reality of diversity in the world. With arrogance and overweening pride, they actually divide the world into two confronting groups: a handful of ‘privileged nations’ vs. the vast developing countries.”

The Global Times claimed that European countries are indirectly responsible for the terrorist attacks in Xinjiang in previous years.

“What is more outrageous is that some organizations advocating Xinjiang independence are blatantly headquartered in some European cities. Some European countries provide them with shelters, gathering places and help to spread their voices, and thus indirectly supported the bloody terrorist attacks in Xinjiang in previous years.”

The editorial concluded that the Western countries are extremely selfish and ignore the survival and development rights of developing countries.

“The West should conduct an introspection as to why they form a small clique and always at odds with the vast developing countries.” It wrote, “If they give us kind advice, we would listen and take it into consideration; however, if they want to act as our teachers and force China to do anything, we would say, sorry, we are not interested. Please go away.”

According to a report from Amnesty International in September 2018, former detainee Kairat Samarkan was sent to a detention camp in October 2017. Samarkan testified that he was abused—he was made to wear shackles on his arms and legs and was forced to stand in a fixed position for 12 hours. He said there were nearly 6,000 people held in the same camp, where they were forced to sing political songs and study speeches of the Chinese Communist Party (CCP). They could not talk to each other and were forced to chant “Long live Xi Jinping” before meals. Samarkan told Amnesty that the maltreatment he suffered drove him to attempt suicide just before his release.

Mihrigul Tursun, a Uyghur Muslim previously detained in a re-education camp in Xinjiang, gave a testimony at a hearing held by the U.S. Congressional-Executive Commission on China in November 2018. Tursun met and married her husband, who is an Egyptian, when she was studying English in Egypt. After she gave birth to triplets—two boys and a girl—in March 2015, she had difficulty taking care of her children and needed the help of her parents who were living in Urumqi, the capital city of Xinjiang. When Tursun went back to Xinjiang, she was interrogated at the airport in Urumqi on what she had done in Egypt. She was then handcuffed and taken to a detention center. She was not allowed to be with her infant children in nearly three months.

Tursun was temporarily released when one of her sons died in the hospital—he was only four-months-old.

Tursun said that when she returned to the detention center, she underwent various forms of torture, such as being tied up to chair, and interrogated for four consecutive days while being deprived of sleep. After a few months of abuse, she began to have seizures.

“I thought I would rather die than go through this torture. I begged them to kill me,” she said in her statement.

Tursun also said she witnessed nine deaths within three months while she was confined in a cell that held 68 other female detainees.